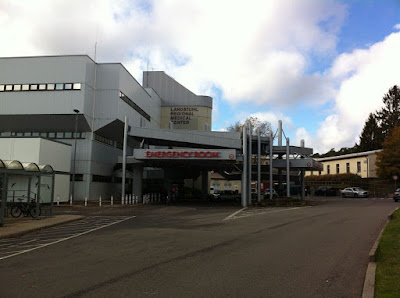 A photo of the main entrance to the Landstuhl hospital, the largest military
hospital outside of the states.


This morning for PT we had a battalion run. In the past this has meant that we all show up very early and stand around in formation for a half hour to 45 minutes before doing anything. Today it was a little better, we formed up and got started pretty quickly. In the past profiles would usually go for a walk, but this time they just told profiles to get on the bus (that brought the folks from Landstuhl) and sit because there was a light rain. I may be on profile, but I still like to get some sort of a workout in. I headed to the gym instead after talking with my boss and used the weight machines to workout my core and back mostly. By the time I was finished the battalion run was done, and they had already made all their little speeches, so I just headed home.

Today was Days of Excellence. Everyone headed there instead of work for a day full of speeches, some boring PowerPoint shows, and some promotions. I was lucky enough to have an appointment in Landstuhl for an MRI at 1130. I left a little after 0900 just in case there was traffic and also because I'm supposed to arrive a half hour early…and also partly because I didn't want to spend any time at the Days of Excellence.

I arrived without issue and was able to find the MRI office after wandering around the hospital for a while. The "Landstuhl Regional Medical Center" as it is officially called, is actually the largest military hospital outside of the U.S. It's also where wounded soldiers from the wars in Iraq and Afghanistan are treated. This really hit home as I was walking down a hall and was passed by a soldier in a wheelchair with only one leg.

Once in the MRI office, I filled out a quick questionnaire answering questions like "do I have any foreign objects inside my body". I only had to sit for a couple minutes before heading back to the changing room. I had to take off everything except my pants, socks and shirt. This includes any jewelry, my watch, my belt and so on. I then was escorted into the scanner room where they explained the entire process to me. If you're claustrophobic, then you would definitely have some issues. I laid down on the table and was given an emergency ball to squeeze if I needed them to stop and let me out. I was also given earplugs to put in. I was told to lay as still as possible as they perform the scan, then I was slid into the small tube where the process started. Even with the earplugs in, it was still pretty loud. There were sounds ranging from different sounding tones, to what sounded like a generator running. They told me the process would last about 15 minutes and it would be OK if I fell asleep, I'm not sure if I could sleep during the process, but the time did go by pretty quick. When finished I was told the results would be available to my provider in 2 to 3 days. The scan was done of my neck, and I'm hoping they can find out what is causing all the headaches I constantly have. On a good day I feel like I'm on the verge of having a headache, but on the bad days I have terrible headaches that really make it hard to do much of anything. The average day is a minor headache. The profile I'm on keeps me from doing stuff that turns that average headache into a major headache. I'm hoping that perhaps the MRI will show something and there can be actions taken to improve my situation.

I headed out to my car and had my lunch break in it. I was hungry and wanted to eat before I made the drive back to Heidelberg. On my drive back SGT Mex gave me a call and said that the work day was over, so I could just head home…very cool. I headed home and did some maintenance on my various home computers. This is the only actual real 25B (Information Technology) work that I have ended up doing since joining the army…working on my own computers.