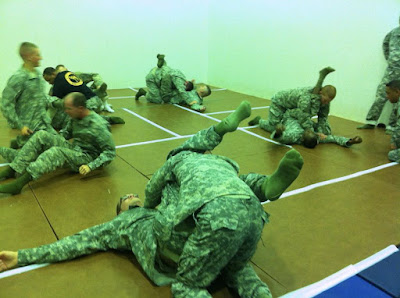 Our platoon working on modern army combatives moves for PT this
morning while I watched and took some pictures...LOL


This morning's PT was combatives. Those of us on profile were required to go and watch instead of heading to the gym and getting an actual workout. So we arrived at the racquetball court in Campbell Barracks and proceeded to watch everyone roll around with each other. The army combative training (called Modern Army Combatives) tries to incorporate a little of MMA style fighting into our training. I don't have anything against this, in fact I'm a huge fan of MMA. I don't know how much good it does anyone though when we only train for about an hour a month or so. I think for it to be really useful, we would need to do it on a daily, or at least weekly basis to get any good at it. Unfortunately I can't do much of anything except watch…if only I was younger and not broken.

At work this morning I was told that I was giving our sergeant's time training for this Thursday. The training…giving everyone a hand receipt holder's brief. This is the same brief I gave my customers yesterday. No problem, I brought up the PowerPoint slides and just went around the room having people read each slide. I would pause here and there giving some of my own commentary, my boss would have me pause as well while he gave some extra commentary. It was painless and pretty easy.

When we finished I had a little time to do a bit of schoolwork before lunch. I had lunch in my car as usual…eat, read, listen to music, nap. Back in the office I had to do some required online training that everyone has to finish before the Thanksgiving break. I had the training on, but with all the noise I could barely tell what was going on with the training. No big deal though, SPC JayZ was there with me when I took the test and he had just finished passing it…so he gave me some tips to help me pass as well.

I then had to inventory a safe that was opened, but during the process I came across a number of discrepancies from the previous inventory. We had to go through and fix everything that was done before…let's just say SGT Steroids is not very good with the details. It's all fixed now though.

I also had to speak with another special agent in the afternoon. This special agent was questioning me about SPC JayZ about his clearance. So I had to let him know what I know about SPC JayZ, which isn't actually too much because we really don't hang out a lot. After that it was about time to clean up and head out.