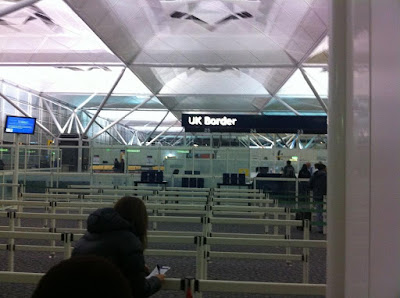 Customs and passport control once we got off the plane. Once we told them we were
here to spend Thanksgiving with family and showed our military IDs along with our passports,
we were sent on our way.


This morning I finished up my staff duty shift. Not a lot happened from midnight until 0900. I did take a few micro-naps, I played a lot of Plants vs. Zombies, and I played janitor and did our mandatory cleaning duties for the S-1 & S-3 shops. After that I headed home and took a nap until 1400. I then proceeded to get ready for the day. When my wife got home, we ate, then headed off to the airport. We decided to use an airline called "Ryan Air". We've heard a lot about this particular airline because of it's cheap fares. It does have some amazing deals with flights as cheap as 10 Euro! It's a no frills airline and if you don't mind traveling light, or boarding the plane like a herd of cattle, then you can save a ton of money. They make their money with a lot of small fees for various items. You can fly with a carry on, but anything else will cost you. You can also reserve a seat, but that will cost you as well. We actually paid a little extra for "priority boarding", which we thought was well worth the extra fee. Priority boarding allows you and the small portion of other travelers who purchased this option to board the plane first. I wanted to make sure I got a seat next to my wife and that we had room in the overhead storage for our carry on bags. This worked like a charm, we loaded well ahead of everyone else and we were set for our flight.

The flight itself was like most other flights, but there were no complimentary drinks or snacks given…they were only available for purchase. The flight was quick enough at a little over an hour, some of which I slept so it seemed like only a few minutes. We arrived in the UK and went through customs easily enough. With our passports stamped, we headed out and met my wife's cousin who picked us up at the airport. My wife's cousin is the spouse of an airman stationed in England. I have to say that all the way home I was a little freaked out, I just couldn't get used to cars driving on the wrong side of the road. It's pretty crazy!

When we arrived at their home, food was waiting for us. I love my wife's family! We ate, hung out for a bit, then passed out for the night.