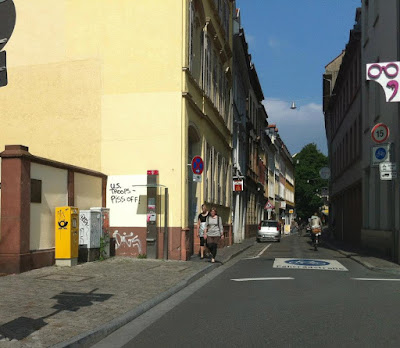 Seen while driving in Heidelberg...even being stationed in a "friendly" country,
there are still plenty of locals around that do not care for a base full of foreign soldiers.

Saturday: We didn't do a whole lot today except clean house and make a shopping run to Ramstein Air Force Base. This particular base has a huge PX and a pretty big movie theatre as well. Unfortunately there wasn't anything good playing.

Sunday: We did even less today than yesterday…just did laundry and made a big grocery shopping run to prepare for my kids coming this week. We watched a lot of TV shows and listened to music. Since it's the beginning of the month I also did my budget and some maintenance on all of our computers. I say all of our computers because I have a main tower desktop, my wife has a laptop, I have a laptop, and we also have an older iMac in the kitchen that we use for recipes or playing music. I also started playing around with my blogs a bit. I'm in the process of importing all the entries from my time in Korea now.

Since not a lot has gone on this weekend I thought I'd spend a little time talking about McLovin. I've mentioned him before and he's a pretty funny guy. He's about to become the guy that people will talk about for a while in our unit because he will have literally eaten his way out of the army. Since arriving in Germany he's gained over 60 pounds. There was an incident (that I won't go into details with) but needless to say it involved alcohol and a loss of rank on his part. A lot of people think the incident was not fair and from the stories I've heard, he really got the shaft. Since that point he stopped caring at all about his army career and decided he wanted out of the army. He gained enough weight to fail the weigh-in twice and is now in the process of getting a general discharge from the army. Right now he's out-processing and will leave Germany in the next couple of weeks. His humor will be missed around the office and especially out on the FTX, he always made me laugh and boosted everyone's moral.