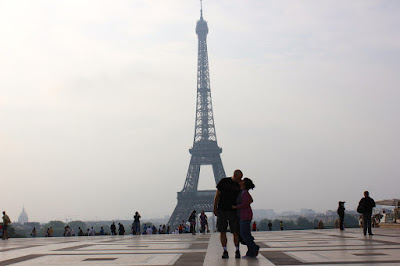 Me and my honey in front of the Eiffel Tower 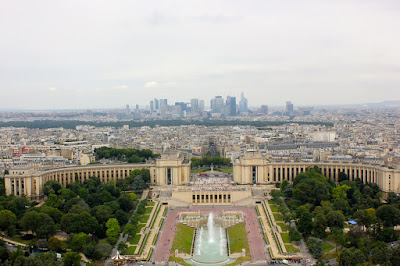 The view from the Eiffel Tower showing "The Palais De Chaillot"

Saturday: We left early in the morning at 0100 on the USO bus. There is a park and ride lot right outside one of the gates at PHV where we met up, and unlike our last bus tour, this one came right on time. We were able to load up and we were all able to sit next to each other. The ride was long and uncomfortable, but I was able to sleep for a lot of it. We made one pit-stop to use the bathroom and get breakfast. The only problem was that the rest area they were planning on stopping at was closed, so they chose the next available one and it was only a convenience store. So breakfast consisted of some store bought goods and not a normal meal…we dealt with it.

We arrived in Paris at around 0700 and had a local tour guide join us on the bus. We then drove around Paris in the bus with the tour guide giving us information along the way about everything we could see. We made a few stops for everyone to get out and take photos, then we finished up in the "Place de la Concorde" which is a major public square in Paris. From this point we were within easy walking distance to some of the city's most popular attractions.

Of course the first thing my kids wanted to see was the Eiffel Tower, so we started walking towards it checking out the architecture and the scenery along the way. Once we arrived, we got in line and ate the lunch we packed from my backpack. The line wasn't too bad for the stairs…we waited for about a half hour then purchased our tickets to start climbing the over 700 stairs up to the 2nd level. The views were awesome and worth the climb. From the 2nd level you can also purchase a ticket to take an elevator to the very top, but my wife and my oldest daughter were a bit scared…and the line was pretty long. So we enjoyed our time in the tower and then made our decent. The climb down was much easier :)

We then walked around in the general direction of where we were dropped off taking our time checking out the streets and everything else. Once we made it back to the Place de la Concorde, we took a bit of a break. Everyone was a little tired from all the walking. My wife, son, and I had a bicycle cab take us to the "Arc de Triomphe", which is where I wish we would have headed first. There are several major streets heading out like spokes from a wheel. We came up the "Champs-Elysees" street and it had a number of shops and restaurants as well as a couple street performers.

By the time we got back, it was almost time to board the bus and head back. I found out that you really need more than just one day to discover Paris and all it's major sites. We loved our time here and the kids had a blast, but my wife and I will make sure to come back and visit the museums with "The Louvre" on top of that list. We also got to see the outside of the "Cathedral of Notre Dame", but I'd like to go inside and check it out as well. I think my wife and I could spend a weekend there and be satisfied.

The bus ride back was uneventful. I slept for a lot of it until we stopped for dinner. The restaurant at the rest area was a little unique in the fact that it straddled the highway, so as you ate your meal you could watch the cars go by in both directions. We were told to "make sure to exit on the right side". We ended getting back to Heidelberg at around 0100.

The USO put on this "Paris Express" tour. These express tours are a great inexpensive way to get out and see another place. The drive may suck and you may end up sleep deprived, but it's worth checking into if you are stationed in Europe.

Sunday: Sunday turned out to be a day of rest…literally. Everyone was so wiped out from the day trip to Paris we all slept in…well some of us more than others. I couldn't get my kids moving until well past noon. We headed to the shopping center and grabbed lunch along with a pair of shoes on clearance for my son. We headed back and watched some TV for the rest of the night.

On a side note…I've found that having my kids here has really limited my writing time. I try and jump on the computer at the end of the night before bed and type out something real quick. In my head I'd like to write up each day with some quality writing, but I usually end up just typing out everything as fast as I can and then uploading it. I've also taken a ton of photos that I will eventually get up on my flickr account. Until then please bear with me until I have a little more time on my hands…which probably will not be until my kids go back home in a couple weeks.