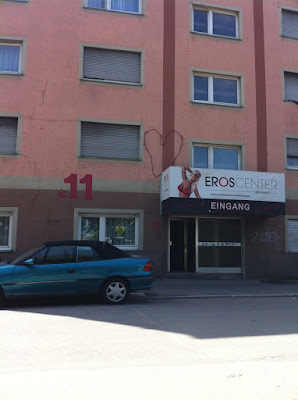 This is the Heidelberg brothel. I pass by this place every time  I head to the PX.
It seems a little strange, but prostitution is legal in Germany.

This morning I did the spin class. There were only about 4 of us doing PT, so we were just told to meet at the spin class. It was a pretty good workout, but my knee was a bit sore. I've had me knee hurt off and on, but it seems lately that it is in constant pain. I'm freakin' falling apart! I'm going to have to get that looked at now.

Everyone else was forced to go to a mandatory fun day (company organizational day). The only reason I got out of it was because I had a physical therapy appointment already scheduled. I headed straight to my appointment instead of work and did my physical therapy. I really look forward to the IFC (shock treatment) and the massage and manipulation that is done to my back. The manipulation is basically what a chiropractor does, but someone usually gives me a short neck massage as well to help loosen those muscles. After the IFC and the heat on my neck and back this is a great way to end the session. I always feel pretty good leaving there.

I met up with my wife at Taco Bell and I tried the Doritos taco which finally just arrived here. I've heard about it from my friends back in the states, but it took a while to arrive over here. I have to say that it tasted awesome…just like a big Doritos chip as the shell with all the taco goodness inside. The only thing that would make this better would be to add the "lava sauce" they used to have in the volcano tacos to this…that would be heaven!

The rest of work was mostly just surfing the internet. I did have to open a safe and take two items out of inventory to send off. This meant that me and the NCO had to inventory the entire safe before closing it. Our NCO closed the office at a little after 1500 since there was nothing to do and nobody there. I cleaned up and headed out. I like having our old NCOIC gone, she would have made everyone stay until 1700 or later...just because.

The night consisted of having my boss and his family over for dinner. My wife made an awesome meal and we enjoyed their company. This will be our last weekend before we're invaded by my kids :)