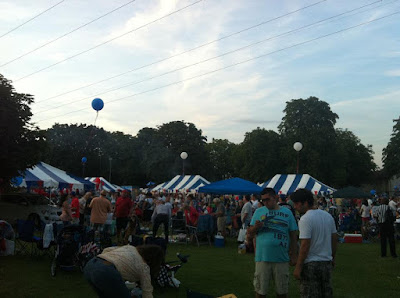 A view of the setup at PHV for the 4th of July...lots of vendors and lots of people

Wednesday: We were not able to sleep in as much as we thought we would be able to. The kids are still a little off because of the jet lag and were all up pretty early. In fact they had already had cereal for breakfast and were watching TV by the time we got up.

We hung out and took it easy for a while before making a run to the commissary, then off to SPC Whirlwind's house for a BBQ. We then headed off the the center of PHV to check out the setup for the 4th of July. At the center there was a stage with a band playing and vendors all around the outside. Across the road in the bowling alley parking lot there were a number of games and rides that you see at your normal town fairs. The weather was a bit hot and my kids were still a bit jet lagged, so we headed back to the house to let them rest until it was closer to fireworks time.

We headed back out to see the action near dusk and watched the fireworks show along with some guys from my shop. It was a decent show along with music, which had to be selected by a Star Wars fan…because there several selections were from Star Wars movies during the show.

Thursday: We again took it easy today. My wife had to work, and the rest of us basically just stayed in. The weather was too hot and melted my kid's desire to head outside. We just stayed in and watched some movies. "Iron Man" and "Drillbit Taylor" were the selections as well as some home made movies we made from our previous vacations…always fun to look back on.

We headed over to the skate park on post and watched my son scoot around on his razor, then headed back to the house for dinner and a family movie…"Jumper".

The two days off were nice and it leaves just one day of work left before the weekend!