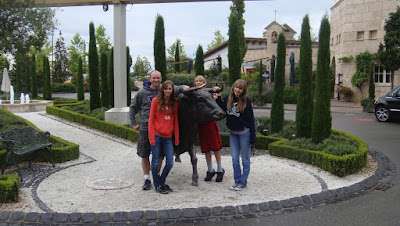 Friday: We woke up pretty early, we were planning on leaving the house at 0630, but it ended up closer to 0700. We headed off following SPC Whirlwind and his family to Europa Park, which is about an hour an a half away. The ride was uneventful except during a stop at a rest area, SPC Whirlwind and I helped push a German guy's van so he could compression start it.

We arrived at close to 0830 and checked into our hotel, well technically we went in and were able to get our tickets to the park but we have to wait until 1500 before we can get the keys to our room. We headed into the park and my kiddos headed to one of the major attractions of the park "Silver Star" a large roller coaster that turned out to be pretty cool. Europa Park is very similar to the DisneyWorld theme parks. It doesn't have Mickey Mouse, but it does have "Euro Maus". Everything from the monorail that travels from the hotels into the parks, to a large Epcot Center like ball called "EuroSat". More than that there are a ton of similar rides. The place is made up of several "countries" of Europe and each country has it's theme and particular rides. All in all it's a pretty awesome theme park and will entertain the very young all the way to the old.

I'm really glad SPC Whirlwind came because after the first few rides I had a pretty bad headache. I think the roller coasters shook me up a bit too much, my back and neck already give me problems…and this didn't help. Then I went on the "Blue Fire" which also messed with my guts, and I forgot my motion sickness pills at home. So SPC Whirlwind was his usual hyper self and went on all kinds of rides with the kiddos. I spent the rest of the day going on old man rides…rides that were easy going and gentle. Not really what I had planned, but the most important thing is that the kiddos had a great time!

We spent the night in our hotel Castillo Alcazar which had rooms to sleep 5. Everyone passed out within minutes of laying down. 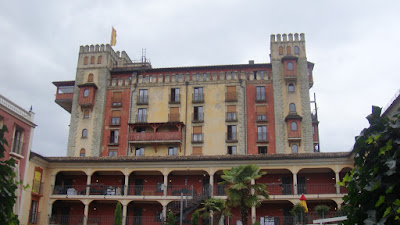 A photo of the place we stayed...Hotel Castillo Alcazar 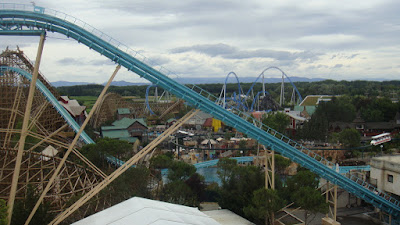 A view of Europa Park from our hotel room

Saturday: We woke up and ate at the included breakfast buffet at the hotel. After that we headed out for another day in the park, only this time it was just our family as SPC Whirlwind and his family only stayed for the day yesterday. I felt better and took some Motrin before we even started the day to help keep the pain away. I think we hit almost every ride in the park and even a couple shows before the park closed at 1930.

We then headed home and hit a "stau" on the autobahn. This is a traffic jam and when it happens on the autobahn (because of a wreck or construction) the backup can be long and time consuming. You will sometimes see people out of their cars, just hanging out. This one happened to last about 45 minutes and we eventually arrived to see a semi which just seemed to be stalled in one of the lanes causing the backup.

Once home we relaxed and took it easy.

Check out a few more snapshots of Europa-Park:

Sunday: A day of rest for us. I had initially planned a day trip to a city nearby, but everyone was a bit tired from Europa Park…so we just hung out at home, cleaned, went grocery shopping, and watched TV. My wife introduced the girls to one of her favorite new shows "New Girl" and my girls started a "New Girl" marathon. I think they are determined to watch the entire first season in one weekend.

Monday: Unfortunately my wife didn't have the day off like me, so I took her to work and then hung out with my kiddos for the day. In the afternoon we headed to the bowling alley here on PHV and did the $1 a game special. Good times and family fun.

After I picked up my wife, we had family dinner as usual and then watched "Star Trek". I've been a star trek fan my whole life, so it was fun to watch the movie with them…I'm not sure if I'll be able to get them to watch the older ones though, I guess we'll see.