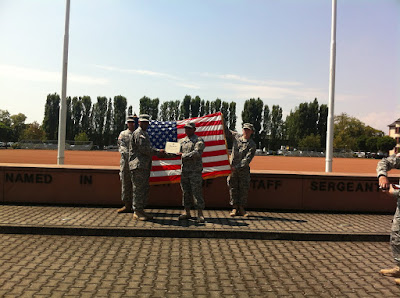 The reenlistment ceremony for the sergeant in maintenance

This morning's pt was a little strange. We formed up in civilian clothes at PHV and after accountability and some announcements we were released to go back home. We were told we can work out if we want…everyone just split and headed home…LOL.

At work I checked my email and such, then learned how to change the combinations on our safes. It's actually a pretty simple process and has to be done every time someone leaves or if we believe the combination has been compromised…or at least once a year. We have two people getting ready to PCS soon so we went ahead and made the change.

We then checked out the technology fair. There was a lot of hype about this event and it was held in the gym nearby. Our office headed over and looked it over. There were a number of vendors offering some pretty cool stuff, but as junior enlisted we really didn't have the power to make any purchase decisions. It was interesting though to see what these vendors are trying to sell to the government. There was everything from physical port security to IA software scanners that will find every vulnerability in your network. 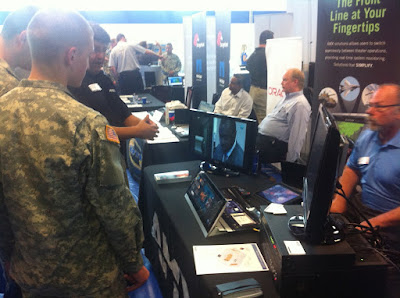 Checking out some of the vendors at the technology fair

After that I headed to lunch. I took my lunch to the food court along with my iPad to read my book. I couldn't sit in my car because the weather has been getting pretty hot! Shortly after lunch we all gathered near the flag poles at the front of the base for a little reenlistment ceremony for a sergeant in our maintenance office. He just re-classed and will be guaranteed staff sergeant after graduating AIT. He signed up for another 5 years! After the ceremony I surfed the internet for a while, then inventoried a safe before cleaning up. We received our safety briefing (don't be stupid) for the weekend and then we were released.

We had a family dinner, then I went to the bowling alley for a little farewell get together for SPC Matrix. I had planned on just buying him a drink and having one myself before leaving, but it turned out to be a 3 hour affair. We ended up playing mini-golf and everyone had a great time…including my kids.

We signed up for a USO day trip to Paris for the weekend. We'll be leaving at midnight and heading to the park and ride near post to catch the bus. Should be a fun filled day tomorrow along with a day of rest on Sunday…more to come….