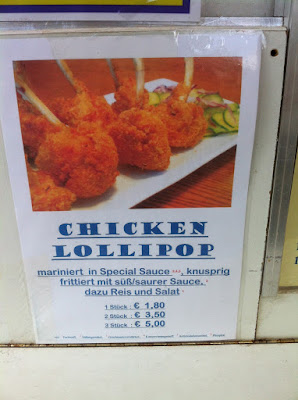 Saturday: Love the weekend…sleeping in and hanging out with my wife. Today we ended up running some errands. There was a farewell BBQ for our sergeant major today, and it was strongly suggested that everyone attend. They even said that anyone who attends will get a day off of work. Let me say that if they want maximum participation they should have it during work hours. As far as the day off goes…I've learned to not have much faith in army promises. So we decided to skip the BBQ and pick up some needed items from Ikea and another store called Poco. We have limited time before my kids come for the summer, so we need to take advantage of any time we do have off. First things first though…we headed to downtown Heidelberg and bought some coffee and some pastries for breakfast. We sat outside and just people watched for a while before starting the day. This is one of the things I really love about Europe. There are so many restaurants and cafes with outdoor seating, it's always nice to just relax and people watch while enjoying a drink or a meal.

Once back from running our errands I worked on a co-worker's laptop. He needed the hard drive replaced and the RAM upgraded. It's pretty sad that this, and upgrading my own system is the only computer work I've done since coming to Germany (besides the couple weeks at the FTX).

We then watched a movie we got from Netflix called "Chronicle". I remember putting it in our queue after seeing the preview because it's based in the pacific northwest (where I'm from) and is about some boys who get some supernatural powers after stumbling on some strange substance. It goes through the progression of them being amazed, to having fun and playing jokes, to having the power corrupt them absolutely. The problem with the movie is that it is made to seem like it's all from one of the guy's camcorder which can get a little annoying at times.

Sunday: Slept in once again…yay. We didn't do much today. I had to finish up with my co-worker's laptop. We also cleaned up the house and moved a bunch of crap to our storage area upstairs. Each of these units that we live in have an attic upstairs and another storage place in the basement. We have most of our stuff in the attic since we are on the 3rd floor. We did bring up the air conditioning unit that we purchased earlier on in the year from the basement. Now we're pretty much ready for the kiddos to come and stay with us for the summer.

I spent some time migrating the posts from my WordPress site to this Blogger site. I found a nifty website that basically does most of the work for you. I was able to export my WordPress journal entries and then have the website convert it for me to import into Blogger. I've been touching up each entry before publishing it, but when I'm done I'll have all my Germany and Korea journals in one place...and everything will be a little easier to manage. I don't have anything negative to say about using WordPress. It's free and easy to use, but so is Blogger. Blogger is very convenient if you use Picasa for photo albums and I am also using Google Sites for my main website. We'll see how it all works out.

We watched some of "The Walking Dead" series. It is pretty good, at first my wife didn't want to watch a series about zombies…but after seeing a few episodes I think it has peaked her interest.

Not a whole lot going on today…back to the grind tomorrow.

Email ThisBlogThis!Share to TwitterShare to FacebookShare to Pinterest
Labels: 25B, Army, Germany, Heidelberg