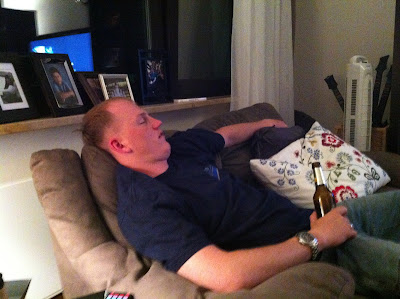 SPC Whirlwind...time finally caught up to him and he couldn't keep his eyes open

This morning for PT everyone did a pretty long run off post, those of us on profile did a decent walk. We walked up and then back down the switchbacks which ended up being a pretty good workout.

Work was the same ol' same ol'. For a big portion of the morning there wasn't an available computer to use, so I just sat in a chair and did nothing except casual conversation with others. I was able to get on one of the computers long enough to print out my weekend checklist as well as a signed copy of our clothing record that needed to be turned in. I can't tell you why this is done, I've had to do it a few times before as well…I guess we're supposed to look at everything and verify that we have everything it says we have. The problem is that we have to turn it in today and have no time to take it home to check all the gear from the list. I couldn't tell you by looking at it if I do or do not have all that is listed on there. So in reality it doesn't do anyone any good.

Lunch time was of course in my car listening to music and taking a nap. Back at work I was finally able to get on a computer for a little while. Besides checking my email, I started the process of putting in passes for July. My kids are coming and anytime we travel more than 150 miles, I have to put in a mileage pass. So I have to put in a bunch of paperwork for two of our weekends that we have planned. Each pass requires a number of different forms including the leave form (even though I will not actually be taking leave), an LES (leave and earnings statement), my ERB (enlisted records brief), an Anti-Terrorism worksheet (if leaving the country), and another sheet that explains what and where we are going. It's all a big pain in the ass, but has to be done if we want to be on pass. When one is on pass, leave is not charged and if there are any recall formations or anything I will not have to come back. I will also not be able to be given staff duty on those dates.

The auditors and our NCOIC went to brief the colonel. We found out that we did pass the audit, which is good news and a big weight lifted off everyone's shoulders. We had everything cleaned up and ready to go at 1500 as we were told, but we ended up not being able to leave until 1630. Still a half hour early, but an hour and a half of mostly sitting around just looking at each other.

We headed home and had invited SPC Whirlwind and his family over for dinner. We had a nice dinner, nice conversation, and some good times hanging out with our friends.