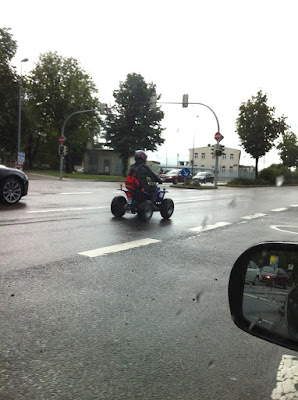 Saw this guy on his 4-wheeler out driving in Heidelberg
the other day....something you just don't see in the states.

This morning's PT was a mock PT test. Since I am on profile I just stood there and watched everyone until it was time to run…but for me and the other folks on profile, we walked. A walker must walk 2.5 miles instead of the 2 mile run. You don't score points for the walk, instead it is a "go" or a "no go" depending on your time. I was told we had 35 minutes or so to finish and I ended up coming in before then…so no worries. The only issue was that because of some poor planning and deciding to do a mock PT test at the normal PT time, everyone left at around 0800 which is about a half hour later than normal. We were told we could come in at 1000 instead of 0900. My problem when crap like this happens is that we only have one car and my wife needs to get to work. I quickly drove home and let my wife take off for work after making sure I could ride into work with SPC Whirlwind.

Thanks to the delayed work time, I had plenty of time to get ready…luckily I didn't waste it. I got a call shortly after showering and eating stating that I had AIC detail again. This is where I go around and be the garbage man (excuse me...sanitation engineer) on PHV. The nice thing is that I don't need a car, but the bad thing is that I had some paperwork I wanted to get done in the office today. I just found out for sure that my daughter will be coming to live with me for the next year. While I'm extremely happy, I know there will be many hassles with all the command sponsorship paperwork and I wanted to get that started right away. "Command Sponsorship" is needed for any family member to get all the benefits and be able to stay here for longer than 90 days. We'll see how all that goes…I know we'll be pushing it trying to get everything done in time before school starts.

I headed over to the AIC office and found out that I'm the only one that showed up for this detail…meaning that I get to clean the entire post by myself. Yay me! I started by walking around with one of those "long pinchers on a stick" and a trash bag looking for trash on the ground. I only had to hit the BBQ areas, the movie theatre and the playground areas. I also had to drive the TMP around looking for any trash cans that were full. I couldn't believe how much people just litter and don't give a crap. I can't imagine these people's yards and houses if they didn't live on post and have forced labor cleaning up after them. They are all freakin' pigs! I worked my butt off picking up trash all over post. I felt like I was in a chain gang out on road patrol picking up trash…only by myself. I know people think I probably got into some sort of trouble because I'm doing a crappy job, but no…this is just a normal day in the army. The good thing about this detail is that I finished by noon. I was soaked with sweat and had a fierce headache, but I was done. I headed home and showered…again, then took some "Goody's" to try and relieve the pain. It seems I'm always in pain…it sucks! I think the physical therapy might have done a little more than planned yesterday.

At home relaxing…I watched "Pearl Jam: Twenty" a rockumentary about the last 20 years of Pearl Jam. I grew up only a ferry ride away from Seattle. Even though I didn't play any instruments, music was my life growing up…and I guess you could say it still is a big part of my life (my iTunes has over 25,000 songs in it). The Seattle music scene was blowing up while I was in high school and for a while after. I loved all the grunge rock and the bands that were coming out of Seattle. I never got the chance to see Nirvana, but I have been able to see Alice 'n Chains, Soundgarden, and Pearl Jam in concert. The show brought back a lot of memories from those days with a number of scenes from Seattle and talk about the beginnings of Pearl Jam which started off as Mother Love Bone…a band that was destined to be great if the lead singer Andy Wood wouldn't have died. The show also covered "Temple of the Dog". This was a little of Soundgarden with Pearl Jam that created a great tribute CD to their late friend Andy. All in all the show was pretty cool showing the history of the band until now. How they hit super stardom and then went on somewhat of an independent road of their own. For any fan, this is a great show…and for any Seattle music fan in general, this is a must see.

While at home relaxing I also decided to change where I post my blogs. I changed to using Google's Picasa web albums. I also use Google to host my original website, so after checking out their blog platform I decided to give it a try so everything will be with one provider. I'm going to leave everything else where it is for now.

Anyway..the rest of the day was uneventful, I watched some TV shows with my wife and then spoke to my daughter on the phone for a bit…all in all a pretty relaxing day.

side note: Now that flickr has increased their storage, I've moved all photos there. While Picasa works nicely with Blogger, I found flickr to be an easy fit with a ton of storage. You can check out my flickr page here and see all the photos and albums in their entirety.

side note II: Now that flickr has imposed limits on the number of photos allowed, I am moving most of the photos to Google Photos. So you may not see much when clicking on the my flickr page link above.