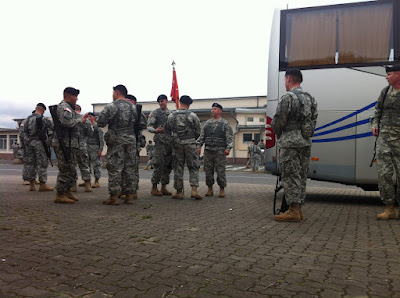 A view from where I was sitting before we started forming up.
You can see the uniform we had to wear for the ceremony complete with beret and rifle.

This morning we did not have PT, but we did have to get up very early as I mentioned yesterday. I was picked up at 0420 by my boss and we headed into work to be in the 0445 formation, but since it's the army we had to be there 10 minutes early of course. We then drew our rifles from the armory. We then had about a 10 minute window where I was able to go in the office and send off my first round of paperwork for my daughter's command sponsorship. I know there will probably be many more rounds, but I'm glad to get it actually started.

We formed up again about 0545 and waited for the bus to pick us up. We headed to Wiesbaden where the ceremony is going to take place. I'm not sure how long the ride was (about an hour or so I think), but I fell asleep pretty quick and woke up right as we were about to enter the base. Once in, we were released for breakfast in the DFAC. Their DFAC was OK, and we had plenty of time to eat (a little over an hour) so there was no rush.

Once finished we boarded the bus again and were taken to the field where the ceremony is going to take place. At that point we did nothing for a while except stand, sit, or smoke. Well I didn't smoke, but I did take a nice seat on the ground and waited. We formed up and waited some more, until finally we marched over to the field.

Once in the field we stood around in our formations for a while before finally getting started with the rehearsal. I was surprised that in addition to our battalion, there were companies and battalions from Stuttgart, Wiesbaden, Belgium, and even Italy. I'm not sure who picked the uniform for the ceremony, but they should be knocked upside the head. We wore ACUs with a rifle, beret, and our flack vest with canteen. It made me remember why I hate the beret so much. Standing around all day in the heat with a wool hat on your head just sucks. To me having the rifle doesn't make much sense either…all we did was sling it over our shoulder for the entire ceremony.

The practice consisted of mostly standing in formation. We would watch some signal flags get waved around at certain points which told us when to be at attention, parade rest or present arms (salute). We also marched around the field a couple times. We did all this over and over and over again. The soldiers had everything down pretty quick, it's the officers that kept messing up and thus making everyone do the ceremony over again.

I have to say the day pretty much sucked. Standing at either attention or parade rest is not much fun when you have to do it for long periods of time. When at these positions the only thing you're allowed to move is your eyes. It got hot and I think a lot of people got sunburned. In fact the first sergeant told one guy he looked like a "cherry popsicle". We did get a break for lunch, but then had to come back and do it again and again…over and over until we were finally released at about 1700. We weren't done yet though…a long bus ride back, a visit to the armory to turn in our weapons, then a ride back home from my boss. All so we can do it again tomorrow. I guess I should be thankful that we only have a 0600 formation tomorrow morning.

As for the night…when I got home, I showered and then just plopped on the couch and relaxed…trying to mentally prepare for tomorrow.

Email ThisBlogThis!Share to TwitterShare to FacebookShare to Pinterest
Labels: 25B, Army, ceremony, Germany, Hurry Up and Wait, Wiesbaden