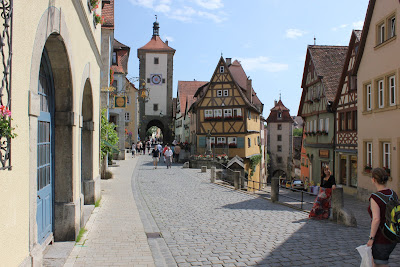 A photo we snapped in Rothenburg ob der Tauber,
which I read that is one of the most popular photo shots taken there.

Friday: This weekend was the army's birthday, so we get a four day weekend out of the deal. I can't complain about that. Unfortunately it was only the army that got a four day weekend, my wife still had to work. I was also recovering from staff duty. I got off at 0830 and had my wife take a break from work to bring me the car so I could take her back, drop her off…then head home. At first I didn't think I was too tired, but as soon as I laid down I was out until 1400…and even then I had to drag myself out of bed. I knew I couldn't sleep much more without affecting my sleep schedule for the rest of the weekend.

I did some laundry and passed the time until I left to pick up my wife. Just as we were deciding what to do for the night, SPC Whirlwind called and invited us over for dinner. We brought over some chicken to BBQ and enjoyed a nice evening with his family.

Saturday: We didn't have any major plans for the four day, but I knew that I wanted us to get out and do something. I have been searching around for day trips to go on when we have time…like today. We chose to head out to a town called "Rothenburg ob der Tauber". This little town is known for being a well preserved medieval old town. The old town has a wall surrounding it, which you can walk around as they did back in the day to guard the city. There are also many towers, old buildings, cobblestone streets, and a lot of shops to check out. We checked out the Criminal Museum (Kriminalmuseum) which was full of all sorts of medieval torture instruments and explanations in both German and English. All in all it was a pretty cool trip.

Sunday: It was a pretty laid back day…not a whole lot to say. Sometimes it's nice not to do much of anything. We cleaned up, did laundry and watched TV shows.

Monday: Unfortunately my wife had to work, so I took her into work and then went to a physical therapy appointment of mine shortly after. This was my first session and I wasn't sure what to expect. The first thing they did was lay me down with some heat on my upper back and around my neck. It felt great! They also hooked up some electrodes of some sort and told me I was going to get IFC "Inferential Current Therapy). My first thought was "shock therapy", but this was much different. There were four patches placed on my back with some wires connected to a machine. As the current went on and off, it caused my muscles to contract and relax. It was a very strange sensation because it made my shoulders move up and down (kind of like I was shrugging) all on their own. They would move together and then alternate. Here I was laying down not doing anything, and my shoulders seemed possessed, moving all around on their own. Again…I just have to say it was a little strange.

The rest of the session involved the doctor adjusting my back like a chiropractor, then doing a number of exercises targeting my upper back and neck. They were designed to strengthen these muscles. The entire session lasted a little over an hour.

I headed home and played around on the internet for a while before watching the movie "Hostage" with Bruce Willis. It was a pretty decent movie, with some good action.

After picking up my wife we ordered some tickets for one of our big trips we have planned for the family when the kids come, then spent the rest of the night just relaxing.

A few snapshots of Rothenburg: