Dragon Warriors & The Drawbacks of Being Tall - (Germany) Day 179 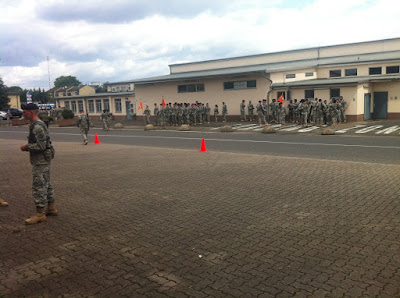 A view of the units in the staging area about 15 minutes
before forming up to march on the field.

This morning we did not have PT once again, instead we had a mandatory 100% weigh in for the company. We had to form up at 0600 in our summer PTs, then wait in line to get on the scale. They base the standards on how tall you are, how old you are and how heavy you are. I came in at 203…my max is 205. For those that didn't make it, they had to get measured by tape to calculate their body fat. If they end up being overweight, then they go on the special population program (also known as the "fat boy" program). People on this get weighed more often and have to attend an extra PT session after work. Usually we're given a bit more time to prepare and I don't eat ice cream for a while when I know we have one coming up!

After, we all stayed around the office. I changed into my ACUs and picked up some breakfast at the bakery in the food court. We actually had a couple hours before we had to go to the armory to pick up our rifles for the ceremony, so I just surfed the internet. It turned out good though, because I found out our platoon sergeant is on leave. I had to resend all the command sponsorship paperwork to our NCOIC.

We picked up our rifles and then waited some more for the bus to come and pick us up for the hour and a half ride to Wiesbaden. I was a little better prepared this time, I brought my headphones and was able to listen to music on the trip. Once we arrived we were released for lunch.

We finally formed up at a little after 1300. Being one of the taller guys I have to be in the front of the formation. This is not a good thing because everyone's eyes are on you, so you have to do everything perfect. The change of command ceremony took place for our brigade commander. The ceremony was uneventful…lots of standing around with a sparse crowd of family members and friends in attendance. Lots of speeches that were a bit too long, then it finally ended.

It wasn't exactly over for us though, we had to board the bus and head over to a gymnasium. Forgetting how tall I am, or how short the ceiling was in the bus…I slammed my head into it. It was hard enough to start bleeding…luckily I had a paper towel that I just held on my head for a while. I hate it when that happens! Once in the gym we waited for a while, then the new brigade commander came in and we had a town hall session. He had a bit of a speech, then asked if anyone in the crowd had any questions for him…..crickets…..of course late on a Friday nobody is going to have any questions, everyone just wants to leave and go home to start their weekend. He then went on and closed out on his speech.

We then boarded the bus and headed back home. Once we arrived at about 1800, we had to head to the armory to unload all the rifles. We were then finally released for the weekend. After a long week I'm really looking forward to a bit of relaxing. My boss gave me a ride home and I hung out with my wife for dinner and a movie in our living room.