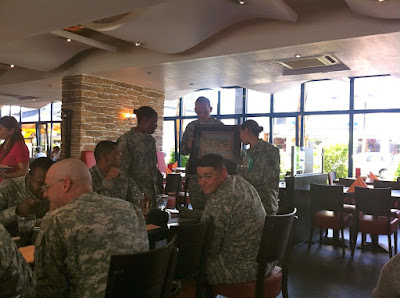 This morning's PT we finally had our PT test. For me it was the first time doing a PT test with a profile, which was a little interesting. My profile states that I can do push-ups, but no sit-ups and instead of the 2-mile run I have to do the 2.5 mile walk. I had nothing to prove and I guess because I just haven't been feeling very motivated lately. I also do not plan on moving up and becoming an NCO…so I didn't really care what I scored on the test, I just wanted to pass. So with this attitude, I started the test. First event the push-up. For my age all that is needed is 34 push-ups in 2 minutes, no problem. When it was my turn I started and did 39 in about 30 seconds or so, then just got up and walked off. I then sat out for the sit-up event. When it came to the walking event everyone lined up together (walkers and runners). Then we took off…there were 4 walkers total and I came in third. The walk has to be done at a decent pace, but it's pretty hard to fail unless you're walking at a stroll. If you keep up a decent pace the entire time there is no problem. I had to complete mine in 36 minutes…I did it in 31:53. PT test is done and passed.

I then headed home to get ready for the day and after dropping my wife off at work, I headed straight to physical therapy for a session. Unfortunately the doc wasn't there for my chiropractic manipulation, but I did get the IFC "shock therapy" and felt pretty good after doing all the exercises and taking off.

I went to work and changed into my uniform from the civilian PT clothes I was wearing for physical therapy. We didn't stay there long, after about 15 minutes we all left for a farewell lunch thrown at a Chinese restaurant for our NCOIC that is now leaving us. The commander and the first sergeant joined us as well. Our NCOIC was given the gifts that our office all chipped in for and the commander gave her an ARCOM (Army Commendation Medal) for her PCS award. A few speeches and a lot of Chinese food later we all took off.

Back at the office I surfed the internet for a while. I think one of the reasons I really don't like my job here is that I always feel like we get nothing accomplished. The last jobs that I worked at had a help desk system where every issue that came up had a ticket created for it. At one job I was the I.T. manager and another I was the system administrator. At the end of the day at either of these jobs, I could look at the reports and see exactly how much we accomplished each day. I always felt like we did a lot, but here I don't feel that. I just feel that the entire job is just dealing with some sort of BS here or there and just waiting for the weekend. I really can't imagine another two and a half years of this. Heidelberg is supposed to close in the near future, so that may shake things up a bit. I guess we'll see what comes of that.

After doing the safe inventory, we cleaned up and headed home. We received the 2nd season of Dexter via Netflix today and started watching that. We're a bit behind, but I love watching TV series on Netflix because you get to watch a bunch of episodes all at once…without any commercials!