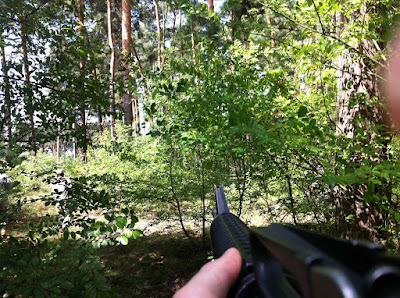 Looking down my rifle as we're about to make an assault

This morning we did not have PT because of our wonderful Thursday Sergeant's Time Training. We formed up at 0630, then drew our weapons from the armory. After that we loaded into TMPs and headed off to Mannheim, where we met up with the rest of our company for training. Before training though we all headed into the DFAC for breakfast.

The training was a little more active than the last time we headed up there. We were broken up into two groups and had one class learning how to perform 360 degree security while the other group worked with various formations to move a squad or platoon. At the end of each training the squad performing the security would get "attacked" by the other squad. It was kind of pointless because all we could do was say "bang bang" as we were shooting each other. At one point I decided to turn into a terminator and just stood up and walked straight at the group letting their "bullets" bounce off me as I just continued a terminator style walk right at them. I gotta do something to entertain myself. As I've complained before, this training has no use for me. Nothing I will ever use…and if there is a point at which I get sent down range and end up on a raid with an infantry group, I know I'll get plenty of training with them before hand. That is one thing that is said over and over again. "Each unit does things differently and you'll get training on your unit's procedures when you're in it, if you get deployed". Then tell me why are we wasting time and money on this training, when we could be learning more about the job we're actually doing, or at least the MOS we should be doing?

After the training we headed back to the DFAC where folks could eat lunch if they wanted. I didn't because I ate a huge breakfast. I'm never sure how the food situation is gong to work on these training days, so I pack snacks and try to prepare as much as possible. There were about 4 people that were taken aside by the commander and the first sergeant once we got back. They were all given negative counseling statements for being overweight. I know at least two of them were NCOs, which is not a good thing!

Once back in the office I checked my email and did a little surfing on the internet. We then had to make sure our weekend checklist was done. We received our end of the month counseling and then cleaned up the office and headed home at about 1600. I'm hoping this will continue to be the norm…leaving early when we don't have anything to do.

Once home I hung out with my wife. We cleaned up a bit, ate dinner and watched some shows.