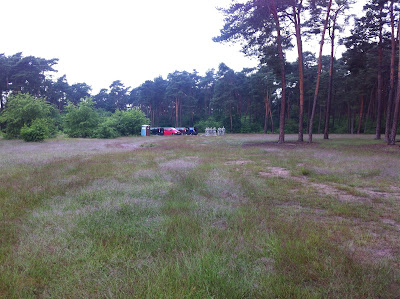 A view across the training area in Mannheim looking at half of our group taking a class...a.k.a. standing around in full battle rattle looking at printed out PowerPoint slides

This morning we did not have PT. Instead we formed up early at 0715 in full battle rattle for sergeant's time training. Our training was to take place in the Mannheim training area. After accountability, we loaded into 4 vans and made the half hour drive to the training area. We ate breakfast at the Mannheim DFAC. We then headed off to our training area…Mannheim has a number of training areas to use for different scenarios. We used one that was basically an open field surrounded by a wood line. I wore my helmet, but not my body armor because of my profile. Everyone else was in full battle rattle for this training…which had to be one of the more stupid ideas we've done so far. Instead of sitting in a room on post and viewing PowerPoint slides, we drove over a half hour to stand around in a semi-circle and view printed copies of PowerPoint slides. No joke! I was speechless. I couldn't believe how retarded this situation was. We went through four classes of this and then headed back to our post…Campbell Barracks. What was the purpose of wearing the body armor? What was the purpose of driving all the way out to a training area to look at printed out PowerPoint slides? Pure stupidity!

Once back I headed home to change into a new uniform and boots…and eat lunch. Walking around from class to class got my boots and socks wet. I also wore my "field uniform", which is an older uniform that I use anytime I know we're going to the field. This way I don't ruin any of my newer uniforms. My back and head were killing me…I did too much during PT yesterday…and perhaps wearing the helmet made it worse. I may have to modify my profile. I hate feeling like crap all day long. I took my paid medication, but it doesn't seem to do a thing. I ended up taking some over the counter pain meds as well, and continued to take more throughout the day to try and counter the pain.

Back at work while I sat at a desk one of the sergeant's came around checking drawers. I guess while I was gone everyone was supposed to clean out the drawers in the desks. Nobody cleaned out the one I was sitting at and she told me to do so…shred it. So I just took everything out except for office supplies and shredded it all. I didn't give a crap.

We had to form up with the rest of 43rd Signal at 1530. A few people got battalion coins for being exceptional and the major got an award for putting together the signal ball. The outgoing commander then gave a little speech, basically saying good job and good bye. We will be having a change of command ceremony next week for him.

After the formation we were released for the 4 day weekend. It figures on the day I have staff duty, they would release everyone early. I had to head over to staff duty, and started my shift at 1600. There was a guy who had extra duty, so he was here helping out with the maid and janitorial service that staff duty usually gets stuck with. So I read my book a bit and surfed the web before being released for dinner at 1800. I was told to come back by 2100 which was a nice little break. My wife picked me up and we had dinner and spent some time together.

Back at staff duty I then watched the keynote from Apple's WWDC event. It's always fun to see what new stuff is coming out. I now want a new MacBook Pro and a new iPhone with iOS 6…those will have to wait for now.

I was able to take the occasional nap throughout the night, but trying to sleep in an uncomfortable desk chair is a little hard. At about 0715 I had to take out our trash, then vacuum the office. At 0800 I left to PHV to pick up an SFC that called and wanted a ride. At staff duty our main job is to sign people in and out of leave and also give soldiers rides if they need it using the TMP. I headed off and picked up the guy who actually turned out to be a pretty nice dude. I took him to the shopping center and we talked about being stationed in Korea. He just arrived and is going through in-processing…a lot of which is done in the shopping center area. He offered to buy me some coffee, but I told him I plan on going to sleep after this! After dropping him off I headed back to the staff duty desk where it was about time to leave. I was let go right after getting back. My wife picked me up and I headed home to nap.