Saturday: It's always nice to sleep in! We took it easy in the morning as usual on a normal weekend. Being able to enjoy the little things like eating breakfast and enjoying some coffee with my wife is priceless. We cleaned up a little around the house and then ended up heading out to the PX to pick up a couple things. I ended up checking out the power zone (the electronics store on post) while the Bose road show was going on. My wife and I ended up getting a new surround sound system for our living room. We called it an anniversary present to ourselves because we didn't want to pass up the $400 savings they were offering today. I then spent the rest of the afternoon taking out the old system and installing the new system. Everything sounds great and has been acoustically adjusted for our living room. We watch a lot of movies and TV shows, so I'm going to say it's a good investment. :)

In the evening we headed out with SPC Whirlwind and his wife along with my sponsor and his fiancé. We headed out to a small restaurant in Heidelberg for a drink and dinner, then headed to the "Schlossbeleuchtung" This is where the Heidelberg castle lighting happens. They make the castle look like it's on fire, which is done in memory of the three times when the castle went up in flames (1689, 1693, & 1764). The first two times were due to wars with the French, and the last time by lightning.

We found a spot across the river and waited until it got dark. The place was full of people waiting to see the event. There were also tour boats on the river loaded with people to watch. Finally the castle lit up in red flickering lights. There were some fireworks that went off at the castle and it stayed on "fire" for a while. The smoke from the fireworks added to the effect, which was pretty cool. Then a bunch of fireworks were set off from the old bridge and that was that…the event was over.

We headed back to our place and turned in for the night.

Sunday: Slept in again and then ended up doing a lot more cleaning around the house. Spring cleaning if you will. I also put together a dresser we bought earlier at Ikea. Once we were finished up, we relaxed, watched a TV show, then headed off to pick up SPC Whirlwind and his wife.

We headed off to a restaurant we've heard quite a bit about. The place is called "Die Kartoffel" (The Potato) and is in a little town called Ladenburg about 20 minutes away. The restaurant was a small little place and what was unique about it was the way they served the steak. It came out on a hot stone and you basically cooked it yourself. The food was awesome as was the experience. We took a walk around the village afterwards to look around because it was all very "old town" German style. Cobblestone streets, small roads, and Bavarian style houses and shops all around…and of course a large church dominating the skyline. 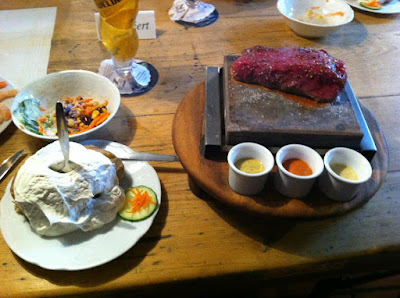 My steak and baked potato at the table....mmmmmm 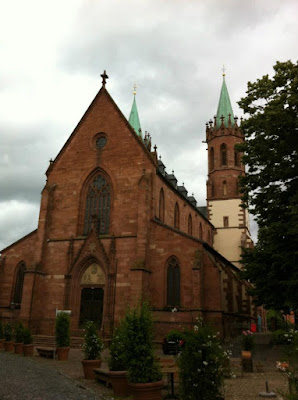 The church in downtown Ladenburg 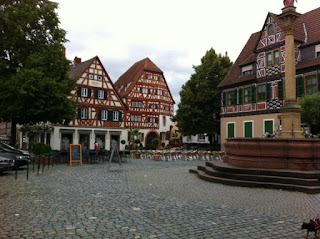