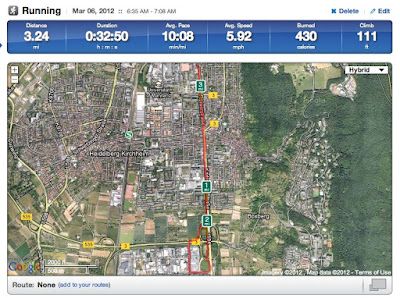 Our morning PT run off post. I try to use the runkeeper program on my phone
to keep track of the distance and routes we take...awesome app!

PT this morning was a pretty good run. We ran off post while in our army pt uniform, which is a little odd…but now that the alert status has lifted I guess it's OK to do now. We didn't run a fast pace, but we did run farther than usual. I'm so out of shape that it did tire me out quite a bit. We only had 4 people total end up doing the run. There was a PT test today and people were either doing that, helping with that (i.e. road guards), or they had profiles or appointments.

Work was a little busier than normal, which I was thankful for. I helped out my boss inventory items. Pretty much the same thing I did back in Korea a lot before one of my sergeants PCS'd. Any hand receipt holder has to make sure everything they have signed for is still around and we have to physically see the item. We also updated a spreadsheet with additional information about each item. Not a big deal, but it did keep me busy.

I also found out that we will not be seeing the sergeant major of the army today (that is Thursday), instead the sergeant major of our battalion may be coming by. It turned out that all senior NCOs ended up having to go meet with him instead of him wandering around to all the shops. Our NCOIC ended up spending the entire afternoon listening to him brief everyone…she wasn't too happy.

For lunch we had a farewell lunch for one of the guys in on the maintenance side of our shop. We ate at a Chinese buffet about 10 minutes or so from the office. He was given an award and a plaque which was nice. He's a pretty nice dude and I wish him the best of luck on his next assignment.

After lunch we continued to inventory items and did so until it was time to leave. One of the guys in the office said I'm going to have to start learning more about ComSec and I agreed. I told him the only way I'm going to retain anything is by actually doing the job, but there has been nothing to do lately. We are going to have most of the office leaving by the end of June and if we don't get anymore soldiers, then I'm going to end up being a pretty busy guy. I don't mind being busy, but ComSec is one thing where you can't mess up…and busy times are when people make mistakes. A serious mistake in the ComSec world and one can find themselves actually in jail. So hopefully I'll get some good training in before then and feel comfortable by the time everyone leaves.

After work I headed home and hung out with my wife. I started school again today with a Java Programing class. I'm glad to be back in class and continuing my progress to get my bachelors degree…one step at a time.