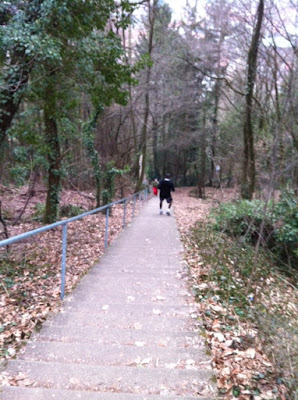 Looking down at a portion of "The Stairs"

This morning's PT was in civilian clothes. We formed up and did our usual stretching, then headed off to do "The Stairs". I had heard about the stairs before, but this would be my first time actually doing them. We jogged off post about a half mile or so until we came to the stairs. We were told we have to go up and down them twice, then jog back to the post. There were a little over 500 stairs! I walked up them at a moderate pace, but about half way up my legs were burning and I slowed my pace a bit. Nobody really passed anyone on the stairs…everyone just kept chugging along one stair at a time making their way up. We weren't expected to run them, which would be pretty incredible. The way back down was not too bad, just had to make sure not to fall. The second time back up my legs were already pretty numb, so I just methodically made my way up and then back down. I even was able to jog back to the post surprisingly. My legs felt like jello for the rest of the entire day…and I'm sure they'll feel even worse tomorrow.

At work I did the usual…surfed the internet after checking my email for anything important. I was told that I will be participating in a task for a month. Details are a little sketchy right now, but from what I've been told I'll be at another post doing actual 25B work at a help desk. It's part of some big exercise, but that is about the extent of what I know so far. I don't even know if I'll have internet access or not, so I had to pause the start of my next class just in case. Hopefully I'll get more details as it gets closer. I hear things like I'll get extra TDY pay, that I'll get an award and such, but I don't believe any of that crap anymore until I actually see it. I never get my hopes up with anything I hear from the army anymore.

After lunch the sergeant in the vault came out in a panic and had the three of us out there start calling any customers that had photocopied signatures. We had to inform them they had to come in before the close of business and sign a copy of their inventory sheet because a scanned copy is not good enough for our audit that is coming. We all started to do this and after I had contacted about 5 customers, the vault sergeant came out and said never mind. So now we look like a fool having to call the customers back and tell them never mind. Oh well.

That was the extent of my day today. I tried getting through the claims process online for my broken monitor and external hard drive, but I keep running into issue after issue. Right now I'm stuck trying to find out the inventory number of the items given by the transporter. In all the hectic mess that was going on when they came, I'm not sure where any of that paperwork is…frustrating, but lessons well learned. Keep every piece of paperwork handy…and don't lose any of it.

Once home I started the process of replacing the hard drive in my computer at home. The first 25B (I.T.) work I've done here in Germany and actually probably the most I've done in the army…that is pretty sad. I have a somewhat large setup especially with my iTunes media library, and I decided to move the library from a spanned RAID setup with 2TB of total space to my new hard drive that is 3TB. This will give me more space and will also let me mirror the two 1TB hard drives that used to be my media library to be used for the OS. This will provide redundancy in case another hard drive decides to die. Everything will also be backed up via Time Machine as it has been in the past. Copying everything took a few hours, now it's restoring the OS from my latest Time Machine backup…so I'm going to sleep.