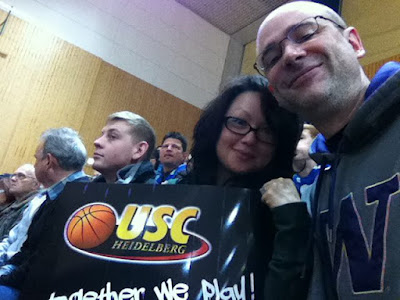 My wife and I at the USC Heidelberg basketball game
Saturday: Finally took the opportunity to sleep in…it's been way too long since I was able to do so. Once up and moving we didn't do a lot except stuff that needed to be done such as laundry and schoolwork. Once finished with that we did make a quick drive into Heidelberg in order to pick up some souvenirs to send to friends and family.

Sunday: Sunday we didn't do a whole lot until later on in the evening. We then picked up SPC JayZ at his barracks and then headed off to see the pro basketball team here in Heidelberg. I knew it wouldn't be anything like an NBA game because basketball is just not as popular here, but I thought it would be fun. Once we arrived at the game we purchased tickets in the 4th row (small venue) and then proceeded to purchase some sausages at the food stand. I had previously looked at the team's website and saw there were some Americans on the team, I remember it said one guy went to Texas Tech. The quality of the game seemed more like a college level…and I'm not talking quality division 1, but still fun to watch. The most interesting part was the fans and the atmosphere. The fans were crazy and were really into the game, it was a fun experience all around!

Email ThisBlogThis!Share to TwitterShare to FacebookShare to Pinterest
Labels: 25B, Army, Basketball, Germany