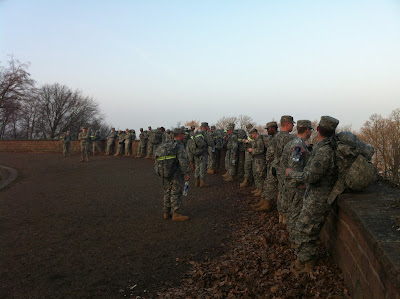 The half way point of our ruck march where we are taking a break. The location is a WWI cemetery located on top of the hill. Unfortunately I didn't have time to learn anything about the place before we took off again after a short rest and regrouping

This morning's PT was a ruck march, but instead of marching around PHV we headed off from Campbell Barracks...off post to what they call switchback mountain. This is the same hill we went up the stairs yesterday, but instead of stairs it is a trail that switches back and forth all the way up. Another difference with this ruck march is that we accompanied HHD, which doubled the size of our group. The ruck march wasn't too bad, it was much longer than our other ruck marches and we did get to see a lot more scenery. We took a break at the half way point which was at the top of the hill at a cemetery. What I didn't like about the ruck was some pretty poor planning on the senior leaders part. We had just done the stairs twice the day before and everyone in our company was already sore, so planning a heavy leg workout two days in a row wasn't too smart. Also being a longer route, we needed much more time. They should have had us leave much earlier than our normal PT time. Instead of finishing PT at our usual time of 0720 or so, we didn't finish until almost 0900. It wouldn't have even been that bad if we were told the night before that this march would be longer than usual because we could have made arrangements. Instead my wife had to call her work and say that she was going to be late because I was unable to make it back on time. Once I got back she left and I caught a ride in with SPC Mac.

Since it's Thursday we had our sergeant's time training. There was a little controversy after our ruck march this morning. We were told that we could wear civilian clothes today if we gave a donation, but the instructor for sergeant's time training said we had to wear ACUs along with our helmet and glasses for the training. There was some grumbling and I decided it wasn't worth the hassle, so I just stayed in my ACUs all day. As far as the training goes instead of watching a PowerPoint , we headed out in the field and learned how to setup antennas. The training was a little closer to my actual MOS training, better than the usual training which seems to be all infantry type training. We did this until lunch and then headed off.

I took my sack lunch to the food court and ate. I had been eating in the office, but it seems that when you're in there even if eating lunch you can get interrupted quite a bit. So I thought it would be a good idea to start getting out of the office.

Once back at work I didn't do much. The audit was still underway which kept the NCOs busy, but we didn't have much to do. I surfed the web, then helped clean up the office and do the paperwork for the safes. We ended up passing the audit which is good. This is preparing our vault for a higher level audit that will be coming in June. I'm still trying to figure out when I can take the motorcycle class, so I can get my license to drive here in Germany. I have to work in the mailroom for the next two weeks and then the next class is while I'll be tasked out for an exercise. The next one is in June and I'm being told I may not be able to go because of the audit. That just sucks!

Everyone in the office including me was walking around pretty funny because our legs were in pain from the two days of serious leg work. This doesn't take into account that the day before the stairs we did lunges with weights. My legs were so sore I could barely walk. We did our safety brief and everyone had to make sure their POV (personal vehicle) was inspected because of the 4-day weekend coming up. We also had to drive our TMP around the post in a big circle to prove we still know how to drive it…I guess this is an annual requirement that they had to do. We were then released for the 4-day.

I watched a little NCAA March Madness and took some pain reliever…along with some wine with dinner. My legs are in so much pain with each step I take, that I can barely walk around the house. I'm thinking tomorrow will be a pretty lazy day trying to recover. I did some schoolwork and then finished the work on our desktop computer. It is now fully restored and now upgraded to OS 10.7. I'm so glad I kept good backups…that is one of those things everyone needs to do, but always puts it off.