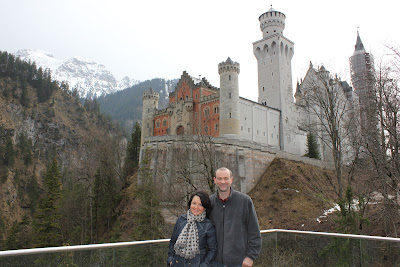 Me and my wife in front of Neuschwanstein Castle

Friday: This morning we woke up at 0600 and proceeded to get ready to go. I didn't have to go to PT formation or anything which was nice, I get the day off and the weekend off because of this marriage retreat. We left about 0700 to the shoppette to pick up some supplies and then to the gas station to fill up before we headed out. Not sure if I mentioned how gas works here in Heidelberg or not, but it's not like other bases I've been to where there is a gas station located on post. Here we are given ration cards (looks like a debit card) that is tied to our vehicle. We're allowed 400 liters of gas a month. The card acts just like a debit card, meaning that we have to fill it up with cash at any shoppette on post. Once it has money on it, we can use it at any Esso gas station. Even though we purchase gas at the Esso station on the German economy, the card is only charged the US prices. This gives us a lot more options than just one gas station on post which is nice.

Anyway…back to the day. I put the address in the GPS for the Edelweiss Lodge and Resort and we took off. The autobahn still amazes me when I drive on it for any length of time. I found that my car will not let me put it in cruise control at 100, the max is 89. Even while driving 100 MPH I was still passed by quite a few cars. I'm not talking a car slowly driving by on me left side, I'm talking I see some lights in the distance and before I know it a car goes flying by me! Keep in mind that I stayed anywhere between 85 and 100 MPH…it didn't matter.

The drawbacks of the autobahn is that there can be some serious slow downs when there is a wreck or construction and we ran into both during our trip down. One accident involved 3 semi trucks! As we went through a tunnel and came out we went straight into Austria. I wasn't planning on leaving the country, in fact we are supposed to fill out some special forms and crap anytime we leave…we are also supposed to have an international drivers license. My darn GPS decided this way would be faster. I have to admit though the scenery in Austria on our way to the Edelweiss resort was just amazing! There was still quite a bit of snow in the mountains with the small towns, this made for some breathtaking views.

We finally arrived about 4 hours later. The Edelweiss Lodge and Resort is army operated for the military. You have to show your military ID to get in just like any other post. The place is the sister resort of The Dragon Hill lodge located at my last duty station in Yongsan Korea. Edelweiss is located right at the base of a number of mountains, so there are great views everywhere you look.

Because we were coming for the marriage retreat, the lodging along with breakfast and dinner were free. We had to attend a few hours of classes starting at 1300. These were mostly on communication, which I always tell my wife is perhaps the most important thing in a relationship. After the classes we were free for the night, but after the drive and the classes all we wanted to do was relax. We did do a quick workout in their fitness room and then spent some time in the hot tub :) 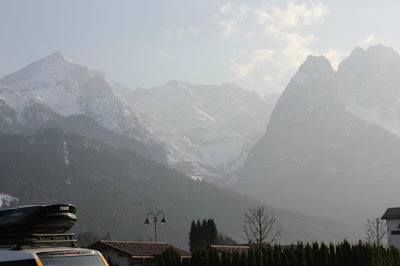 Saturday: The morning started at 0630. We woke up early to attend breakfast in order to avoid the rush. We had the buffet and then headed back to our room to get ready for our morning classes. The classes were from 0900 to about 1130. We then decided to head to Neuschwanstein Castle. This castle was the inspiration for Disneyland's Sleeping Beauty Castle. The drive was about an hour and I think it was well worth it. Once we parked, we had to make a half hour walk up to the castle which is located on a hill overlooking the valley. The castle was amazing, it's just unfortunate that we were unable to take pictures inside. The only way to go inside the castle is via a guided tour, but the tour was interesting and they have them available in English as well.

Sunday: The morning was the same as yesterday, we got up early and ate breakfast. We had to check out of the hotel, but still attended a couple hours of classes in the morning from 0900 until almost 1100. Once that was finished we were released for the weekend.

We had decided to go to the Dachau concentration camp. This is not your typical vacation destination, but it was located on the way home and is a place I wanted to see just because of the historical value. It took us about an hour to get there, and we spent a few hours taking it all in. The camp is still setup with the fence and guard towers. They have a museum on the grounds which also offers documentaries that you can watch in various languages. We happened to arrive just in time for the English version. We sat down in the theatre and watched about all the horrible things that happened there. After the film we checked out more of the camp. There are memorials setup to see, they also have barracks you can go in and check out. The most disturbing though was the crematoriums. They had a small one that couldn't keep up with the demand, so a larger one was built. There are several memorials around it marking the thousands upon thousands of people's ashes that were buried in the area. I was also able to see the gas chamber that was made to look like showers.

The entire experience was pretty eye opening and jaw dropping. To walk around where thousands of people suffered and died was a somber experience. We headed off for home after that and drove the long drive back along the autobahn…which even when driving 100 MPH still can take quite a while.

We arrived home about 1800 and just kicked back and relaxed for the rest of the night. I watched some NCAA basketball…who knew a marriage retreat/vacation could make you so tired.