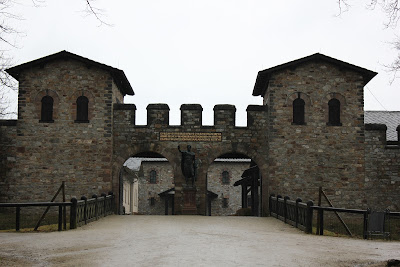 The entrance to the Saalburg Roman Fort

Friday: I woke up this morning with my legs still extremely sore. I actually could barely walk around the house, so I'm glad I had the day off! I spent most of it with my butt planted on the couch watching the NCAA tournament. I also continued to do the only I.T. work I get to do these days…which is work on my own computers. I finally upgraded all of them to 10.7.3 and made the move to iCloud from MobileMe. This is supposed to promise better synchronization between our computers and our iOS devices. The downfall is that I cannot host my website on iCloud, which is the reason I started using WordPress for my current blogs and moved the main site to the free Google Sites. Most of the content is still there including my basic training and AIT journal. Google just doesn't allow for enough free space for all the photos I want to upload…even using Flickr, I would have run out of space too fast.

So the entire day was mainly recovery for my legs along with some I.T. work and schoolwork. The schoolwork I'm finding very tough. It's hard to learn programming from an online class. This is one of those times I wish I could attend class in a normal classroom environment with a teacher, a lecture, other students asking questions, and practice time on a lab computer.

Saturday: After sleeping in and taking the morning easy, we headed off and picked up SPC JayZ and his wife at his barracks. We then headed off to the Schwetzigen Castle. It's actually only about 20 minutes away or so from Patrick Henry Village. The castle is not so much a castle in the traditional sense. It seems more like an large fancy building than a castle. It does have a very large garden area with a number of statues and fountains (that weren't running at the time). After walking around and taking in everything I knew we'd have to come back in the spring or summer time after everything has bloomed. I'm sure the garden area looks spectacular and the fountains just add to it.

We took a tour of the castle, but unfortunately they only had tours in German. They did hand us pamphlets to read as we were on the tour that explained everything that the guide was saying in each of the rooms. It was a pretty interesting tour and it gave a lot of insight into how not only royalty lived, but also how their servants lived back in the day.

After the castle we had dinner at a Cuban restaurant outside the castle called Cubar. The food was pretty good and it was a nice way to relax a bit after walking around all day. Once finished we left and headed home after dropping off SPC JayZ and his wife. The rest of the night consisted of schoolwork and a TV show or two.

Sunday: We had pretty much the same morning as yesterday, taking our time getting ready and then heading out in the afternoon. We headed up to visit a friend of mine that I made over 20 years ago when I was an exchange student here in Germany. This guy actually came and lived with me and my family for a bit once I came back so he could experience America. Before we visited him, we headed to the Saalburg Roman Fort. This place was pretty impressive, just walking around it and thinking of all the history that took place here way back in Roman times. The fort held 500 to 600 soldiers and while everything is in German when walking around, we could still get a great idea of everything there. I had checked out the website first, so I knew a little of the history.

After that we checked out the Schloss Castle which is a castle that has been turned into a 5 star hotel. The place is very impressive, but we weren't sure if we could just walk in and check everything out or not, so we just walked around the outside taking pictures and basically just looking around.

Our next stop was Grosser Feldberg which is the highest mountain in the Taunus area. It offers a view of the surrounding area, but our time there was limited as we were pretty cold. When we left Heidelberg it was not too cold, but we should have brought our coats! We snapped a few quick pictures and then headed off to visit with my friend in Kronberg which is very close to Frankfurt. We arrived and visited for a couple hours. I'm so glad I have my GPS, I can't imagine trying to find all these places without it! We talked about the old times, the new times and the in-between times. It's crazy how much has changed over the years, but he is still a great guy and his family seems very nice as well. I'm looking forward to hanging out with him more during my stay here.

The drive back was uneventful…I still can't get over how I can be going 80-90 MPH and have people pass me like I'm standing still on the autobahn. Once home it was time for more schoolwork.

Monday: Monday was a day of rest for me. My wife had to work, so I took her into work and then came back home to do stuff like catch up on laundry and schoolwork. My legs are finally starting to feel somewhat normal now. It feels like I had a normal workout yesterday and my legs are only a little sore…nothing like the pain and agony I had been feeling with every step I took…especially when going downstairs.

My class is still pretty tough. We had the first person drop the class from our team. I don't blame her, it's very tough to learn on your own. I'm just hoping I can somehow fumble my way through it and get it over with. Programming has always been very difficult for me and I have no fantasies of actually being a programmer when I grow up.

As for pictures….I'll be sending a lot of them up to my flickr account in the next day or so…time just got away from me this weekend.

Here are the albums on my flickr: Saalburg Roman Fort & Schwetzingen Castle


Or you can check out the slide shows below: