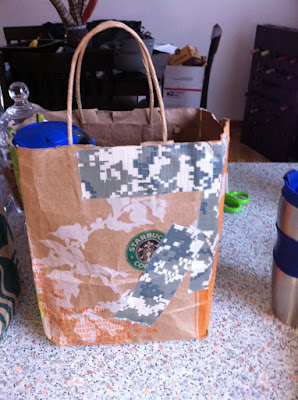 My lunch bag. A Starbucks bag with digital cammo duct tape
on any parts that have ripped.

PT this morning was not actually PT at all. We had our formation outside the barracks, our company has offices and the armory in the lower level of the barracks in Mark Twain Village. This morning our company was conducting 100% required weigh in. We were told that anyone that is overweight and "busts" tape (if you are overweight, your body gets measured and a formula is used to figure out your body fat percentage…you "bust tape" if you are over the limit) will get flagged immediately. Once a person is flagged they cannot do anything such as go on leave, on pass, get promoted, etc.

Even though it was a 100% for the entire company, the higher ranking individuals such as the XO and the senior NCOs went into the office and did it with the door shut. This seemed a little strange to me and also a little suspect, but I'm just a private so what do I know. I see fat NCOs all the time and wonder how the heck they even pass their PT test let alone their weight test. I wonder if they do this "closed door" weigh in as well. I'm not saying our leaders are like that, it just seemed a little strange.

After standing in alphabetical order we finally started moving after about a half an hour of just standing there. When it came my turn I came in 6 pounds under my limit for my age and height. Once finished we were allowed to leave and report back for our normal Thursday Sergeant's Time Training at 0900 back in the barracks office. I drove home and proceeded to get ready for the work day.

Our training today consisted of a bunch of people crowded into a room trying to see a PowerPoint presentation on a small computer screen. I have to say that if the company knows we have to have training every Thursday, and most of these trainings are conducted via PowerPoint that they would invest in a projector! When my boss had to do training, he brought in his flat screen TV and hooked up his personal laptop to it in order to do the training which worked well…but he shouldn't have to provide all the training equipment himself…the company should.

The actual training was over troop movement and planning operations. A bunch of typical infantry type stuff that really doesn't pertain to my job. I swear whenever the army needs to do training they always fall back on infantry type stuff instead of thinking a little outside the box and doing some training that would actually help us learn more about our jobs.

Once the training was finished it was almost lunch time, so I headed back to the office and ate my lunch. I then had to ride with my boss and a few others from 1st Platoon to "K-Town". K-Town is actually what folks around here call the Kaiserslautern army garrison. The trip was a little over an hour and we went to the theatre on post to see the Sergeant Major of the Army. He was doing a Town Hall meeting and our company needed to send a certain number of people. Since I'm the lowest ranking it's easy for them to choose me to go. I had already been to this same type of town hall meetings with the SMA while I was in Korea. This one was basically the same, going over the troop reduction, sexual harassment, and answering people's questions. One new thing added was the new ACUs that are being considered. He passed around various prototypes of new tops and bottoms that were being considered. I think they all are better than what we have now…they are getting rid of the Velcro on the sleeves and pants which never seem to work that well with the current uniform.

The meeting didn't end until 1700 and because of traffic leaving post (normal post traffic getting off work plus the surplus of traffic from the meeting, we didn't get off post for an hour). We then had to stop at Patton Barracks on the way back to fill up the TMP with gas. I didn't actually get back to my house until 2000! I then ate dinner and worked on schoolwork.

Tomorrow is Friday…looking forward to getting through that so I can enjoy a nice relaxing weekend.