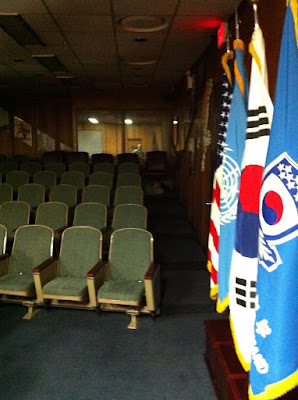 Kind of hard to tell with this picture, but our KATUSA was found asleep in our
conference room on the floor in front of the sound booth. We were wondering where the heck he was.

Work call this morning was at the normal time…0830. There were no meetings scheduled in the morning so all I did was SkillPorts. The difference this week and from now on though is that our sergeant now is requiring us to complete 10 SkillPorts a week. This is doable, but it means that we will not actually be able to go through the lessons and learn the material. All I did all morning until lunch time was go to the answers at the end of each course and skip the content. I answer the questions and if I miss any, I copy down the correct answer and then take the test again. I would say it's not what the army had in mind when they put this out for promotion points, but we have to do what we have to do. I finished 8 by lunch time.

For lunch I headed to my room and ate while video chatting with my wife and my kids. My son loves that he has an iPod and can use Skype to call me…I love it too :). When I headed back to work I was able to finish the last two SkillPorts needed for the week. Now that I have those behind me I can concentrate on other things. I did some office work and checked up on some of the help desk tickets I submitted last Friday.

We headed down to the secret conference room to help setup for a retirement ceremony for a colonel. We only had to put in name tags, but our Major in the office wanted all three of us to stay around in case anything else was needed. We were his security blanket. We hung out doing next to nothing for about an hour. We helped bring the food down which by this time of the day was smelling very good. It was almost 1630 and the ceremony was about to start. I headed to my usual position…holding the door open down the hall for the general when he comes (a.k.a. a doorstop).

To my surprise there was an honor guard there already performing the task. There were a number of honor guard in their dress uniforms for the ceremony. I just stood around and spoke with him for a while. He has been here in Korea for 7 months and can't wait to leave. In fact he just found out he'll be going to Fort Carson. Wow…maybe I'll find out where I'll be going in two months or so. I'm curious, just not as curious as I was in AIT. I have places I would love to go, but most important I just want to be with my family.

After the generals walked through I headed back up to the office with my co-workers and we cleaned up. We had to wait around until the ceremony was over at 1730 so we could go clean up. When we went down we were asked to have something to eat from the left overs. It was some pretty good stuff…meatballs, yaki mandu, and gimbap as well as some other stuff. We indulged until everyone left and then cleaned up. We helped carry all the awards and plaques to the colonel's car and then finally left.

I got to my room a little after 1830 and watched some TV shows, did some schoolwork, and then went to sleep.