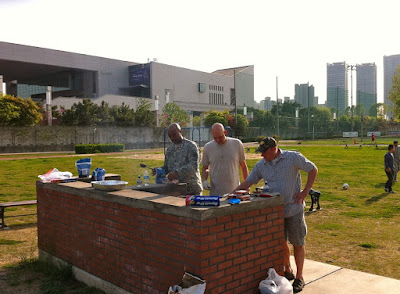 The SACOs in our office barbecuing the hamburgers and hot dogs

Once the meeting was over we cleaned up, then I headed up and worked on SkillPort. Our sergeant came up and said that he would buy everyone lunch if we brought him back something. We went to the KATUSA cafe and I had some spicy pork which was awesome. SPC Mick had a dish that turned out to be a little too spicy for him, his entire head was beading with sweat by the time he was finished...lol.

We headed back to the office with lunch in hand for our sergeant. I then watched some NBA playoff action and saw The Oklahoma City Thunder (I can't say that without throwing up a little in my mouth) beat Memphis. After the game I headed back to the computer to work on SkillPorts yet again.

My sergeant called me after a while and asked me to run some errands with him. We had to pick up some awards and other stuff, then he got a call he was not too pleased about. He said he had to go pick up his "bag of rocks"…which turned out to be his wife…lol. We gave her and her son a ride to the navy club and dropped them off. We then headed back to the supply sergeant's office where she asked me to setup email for SGT Enchilada who will be working there part time. I did it in a couple seconds, but we ended up hanging out there for a while as my sergeant and the supply sergeant chatted.

My sergeant then had me use the office car to pick up SPC Mick, our KATUSA, and the supply sergeant as well as her KATUSA for the hail and farewell picnic. I drove them to the barracks so we could all change into civilian clothes, then we headed to the park for the picnic. We had the traditional hamburgers and hotdogs as well as a bit of Korean food thrown in the mix.

There were a number of speeches and such, it was basically to welcome the new folks that had arrived in our office and our sister offices. It was also a time to say farewell to those that will be leaving soon. This included one of our SACOs and our colonel both of whom I think are great officers.

Once back in my room I did a little schoolwork, then watched a TV show before going to bed. I found out I have to get to work extremely early tomorrow morning for the range. 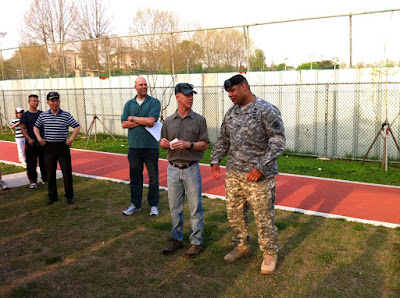 Our colonel on the left welcoming CPT Hooah! to our office