Work call this morning was at 0730. We setup for an early meeting in the top secret conference room and then setup for another meeting in the secret conference room. The morning schedule was a little busy, but there were no meetings planned the rest of the day. We have a PT test planned for tomorrow morning, so I've been drinking water like a camel all day. I've always been told to hydrate well before a PT test, so I"m doing my best to do so. The problem is that when I have to go pee it hits me like a freight train and my bladder feels like a dam that's about to burst. Each trip to the bathroom brings with it great relief, then the cycle starts over again.

Our office decided to buy pizza and have sort of a pizza party lunch with our sister offices. We weren't celebrating anything, I guess it was just for the heck of it. Special K and I headed off to Pizza School which is located about a block away from post. They have a number of pizzas for only 5,000 Won which is a little less than $5, so we bought 9 of them. We then headed to a shoppette on post to get soda. On the way back in Special K realized that he left his ID card in his computer. We had to pull over at the gate and he had to get out and input his social security number into the system. Once that is done, his picture comes up and the guards allow him to enter. We then headed to the office so he could get his ID, then to the shoppette for the soda. By this time the pizzas were done, so we went back and picked them up.

We had lunch in our conference room with the lights dimmed and season 1 of "The Unit" playing on the big screen. We had most of our office, our admin office, and a KATUSA from our supply office there to join us. I ate a lot, I can't resist the spicy chicken pizza. I ate so much that I don't think I'll be eating dinner.

After lunch I worked on some SkillPorts for a bit, then our sergeant said once we cleaned the conference room and the office we could leave. When we were on our way out the door he said tomorrow's PT test was cancelled. All I could think was crap…all that water I drank and all the hurried trips to the bathroom were for nothing. Also I can't turn in my leave requests until I pass the PT test, so I would rather do it sooner than later.

I got to my room a little after 1500 and actually had a chance to video chat with my wife for a while which was nice because I didn't get a chance in the morning. I then rested for a bit on the verge of taking a nap, when my phone rang. It was my sergeant telling me the PT test is back on for tomorrow. Holy cow…make up your mind. I better start drinking some more water… 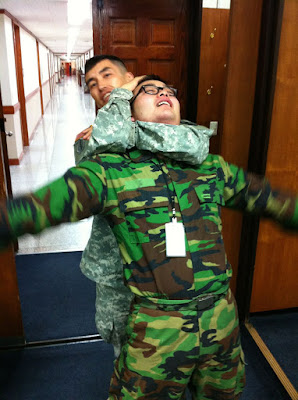