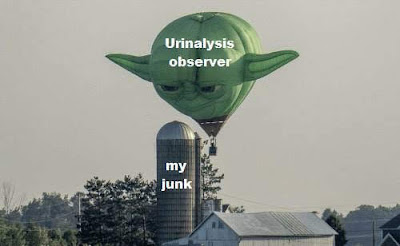 I headed to morning formation in ACUs with all intentions of turning around and heading straight back home. My sister found out she has cancer and will be in the hospital for surgery all day. I planned to be there with her and my mom. The powers that be had me picked for a pee test this morning...again. So along with about 9 others, we headed to the company to do our thing. I was a little surprised they were doing another pee test so soon…and I was also surprised that I was on the list yet again. I guess they probably have a lot more pee tests here because marijuana is legal in Washington state and because everyone in the WTB unit is broken. When you're broken, you're in pain a lot of the time. This means there is a lot more potential in abusing drugs. In fact I would love the chance to test out the medicinal properties of marijuana. If it helps with half the things that it's proponents say it does, then I'd be set and in no pain anymore! I'll have to wait on that though until I'm out of the army, because while I'm owned by the army…marijuana is still illegal.

I sat waiting for the urge to go pee along with my small cup of water that I had refilled a couple of times. I then felt a tingle down south and knew the time was near. I notified the NCO in charge and was assigned my small cup to fill up with my pee. As I headed in the observing NCO had me head into the handicapped toilet stall instead of the urinal. I thought that was a little strange, but headed in as instructed. Next came a very uncomfortable situation!

As I unbuttoned my pants and prepared to fill the cup, the observing NCO squatted down and put his face about 6 inches from my crotch! I'm not exaggerating one bit! As I tried to pee I found it extremely difficult with his face so close. Perhaps it was a little stage fright, but I was only able to squeeze out a tiny bit…nothing close to what is needed for the actual pee test. What the observing NCO did next didn't help at all. He started cheering and rooting my penis to push out some more urine into the cup. I told him I'm going to have to try again later.

There I left with barely enough urine in my cup to fill the bottom. I had to rinse the cup out and then smash it before throwing it away. Then it was back to drinking water…and lots of it. I got into a routine of drinking a glass of water, then playing a little of my game on the iPhone. I repeated this process for quite a while. There were a couple times I thought about going, but I didn't want another "false start" episode again. If I went in the restroom with my little pee cup and had to have the observing NCO 6 inches from my junk, I wanted to make sure I had to go…and go bad.

The time finally hit and without any doubt, I informed the NCO in charge and headed in with my new little pee cup. This time there was no question and not even an NCO within 6 inches of my penis was going to stop the floodgates from opening. I filled the cup and sat it aside while I kept going and going and going. Finally I finished up, screwed the lid on and headed back to the NCO in charge with a full cup of pee in hand. Surprisingly I wasn't even the last to finish, there was still one more person after me that still hadn't gone yet…even after waiting over an hour!

I then was able to head home and change, then I headed into the hospital to hang out with my sister, mom and other extended family. I'm grateful I'm back home now to be here for them.