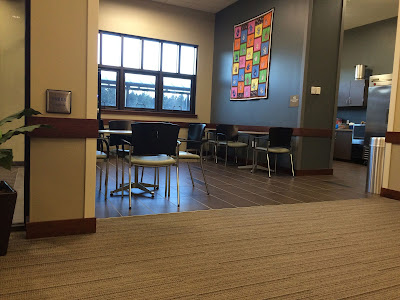 A view inside the SFAC showing the small dining area on the left, the kitchen is to the right.

We formed up for PT this morning and then those of us actually doing PT headed to the gym. The gym is a bit of a drive, so now that I know where it is I just met everyone there. Once we finished I was able to change and get ready in the gym locker room. After that I parked in the WTB parking lot and took a nap in my car.

I headed to our finance office with my paid hotel receipt in hand. When I was finally waited on, I was told our finance office doesn't do the hotel reimbursement. They told me to go to Waller Hall. This pissed me off just a little bit, because I'm starting to wonder what the finance office at the WTB does at all.

I headed to Waller Hall and after waiting a while to get called, I am told that because I haven't been paid for my PCS travel, they can't do my hotel reimbursement yet. "They can only do one thing at a time". Sounds like lazy bastards that don't want to do their job to me. Sounds like they are hoping people forget to bring in their receipt to get their reimbursement. I was pretty pissed off because now I have over $800 charged on my credit card and they said the PCS travel payment can take 4-6 weeks. This is such BS! The hotels on post in both Korea and Germany both just settled the billing behind the scenes. I didn't have to do anything, let alone pay in advance and hope to get reimbursed. I left the place very pissed off! A crappy way to start the day.

I head to the SFAC and did some online training until lunch time. I ate lunch in the SFAC and then headed out to my car. I listened to the radio, played games on my iPhone and read a bit on the iPad. I have a feeling I'll be spending quite a bit of time in my car while I'm stationed here.

I head back to the SFAC and get both my ERB and LES printed out for a future appointment on Friday. I then head to the 1600 evening formation and then to the battalion newcomers brief. This brief had various people come in, introduce themselves and tell a bit about their office and what they do. The problem with this shotgun approach is that I couldn't tell you how many or even who all came up and did this. It's just a little overwhelming. Once they were all finished there was a dinner prepared by volunteers afterward. I found someone to sign off on my in-processing checklist and took off. I'm very grateful for the volunteer's efforts and I'm sure the food is great, but I had my wife and family waiting for me at home to eat dinner with. This is mainly for the single soldiers that live in the barracks. I didn't feel bad cutting out early.