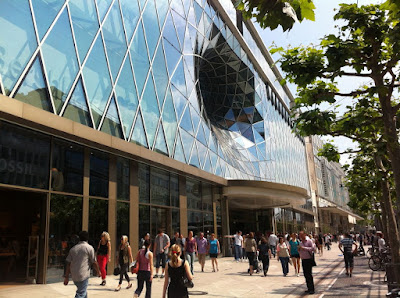 During our last visit to Frankfurt...The Myzeil Shopping Mall...has a pretty cool hole in it!

This weekend we are staying at the Sheraton hotel which is connected to the Frankfurt airport. We'll have a lot more available to us including a short train ride into downtown Frankfurt instead of being trapped on "PHV island" without a car for our last weekend here in Germany.

As for my thoughts about my time here….

I had been to Germany as a young lad as part of our high school exchange program and had a blast, so I was excited to come back and visit as an adult. I was also very excited to be assigned to an actual signal unit, I figured I'd be doing my actual job and getting involved in all kinds of high tech information technology…geeky stuff. I figured wrong.

Germany and Europe were a blast as far as being a tourist goes. My wife and I made the most of our time here. We explored as much of Germany as possible and also made our way to England, Holland, Spain, France, Luxembourg, Czech Republic, Italy, Switzerland, and Greece. I loved being able to see all the history and my wife and I really enjoyed our time here. Our hometown of Heidelberg is a great city. The food and beer in Germany is amazing. The people we met were awesome and I was able to visit all three of the German exchange students that had lived with me in America as part of our exchange program.

Professionally my time in Germany was a real bust. Even though I was in an actual signal unit, I ended up being a ComSec clerk…which is actually a glorified librarian that only needs to make sure customer's paperwork is in order and all the signatures are in the correct places. A computer is not even needed to be a ComSec clerk. On top of that there were so many special duties and training that we had to do which had nothing to do with the job I signed up for…an Information Technology Specialist. Truth be told the only I.T. work I did was when I worked on my home computers. When I vented my frustrations via this blog, I ended up in all kinds of trouble. Free speech was thrown out the window. One does not simply shine a negative light on what's going on in the army. If a high ranking someone gets butt hurt, then there is going to be hell to pay. Even without getting in any official trouble, I had to deal with a lot of unofficial punishment…special duty, verbal assaults, and being alienated. Even though I never received any official punishment, my life was a living hell for a while. Ironically during my year and a half in Germany I received 3 AAMs (Army Achievement Medals) and the Good Conduct Medal.

I eventually ended up working as the chaplain's assistant, which helped him out and got me out of the sergeant major's bullseye. It worked out and my stress level went down considerably. During this whole process I did receive my clearance and I also ended up getting recommended for the medboard. So now I will move on to the next and last chapter of my army career as I go through the medboard process. The good news is that I'll be stationed at Ft. Lewis during the process which is only about 40 minutes from my hometown. I'll have the support of friends and family. I'll also be able to be a bigger part of my kids lives.

All the posts in Heidelberg closed down about 3 months after I left. The local newspaper had an article along with a video showing the Germans checking it out for the first time. (The page is in German, but if you use the chrome web browser it should offer to translate it for you. The video is also in German, but you can watch it as it shows you around Campbell Barracks where I worked)

We did make one last trip via train from the airport to Frankfurt... 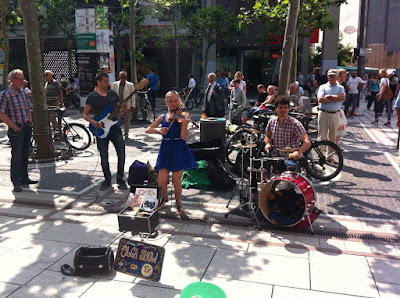 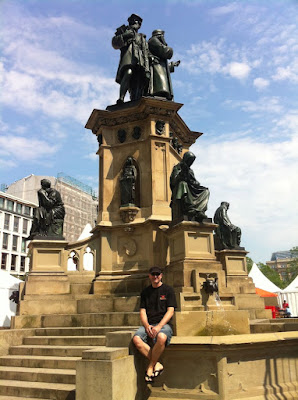 Taking a break and posing for a picture 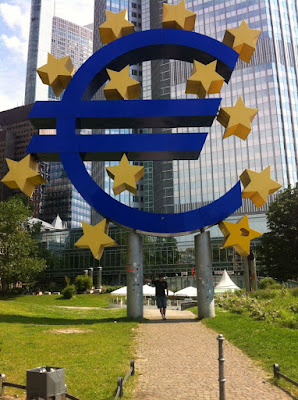 Me posing under the giant Euro sign in Frankfurt