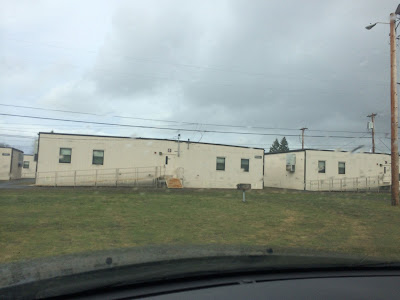 This is where my PEBLO is located...a bunch of temporary units on Ft. Lewis

Headed to PT formation this morning in ACUs and surprisingly they decided to have it inside because it was raining. Maybe I was a little too quick to judge yesterday, perhaps the company is getting a little common sense! I came in ACUs because I had an appointment with my PCM (Primary Care Physician) at 0900. Technically we are supposed to come in ACUs only if our appointments are at 0830 or earlier, but I wasn't going to chance it. I didn't know if the company was going to be stupid and make everyone do PT outside or not. After formation I headed to my car and took a nap after eating my breakfast.

My PCM appointment went fairly routine. The doctor went over how I felt the last couple of weeks and then gave me a refill for my Tramadol. The medicine doesn't take away all the pain, but for my mild to moderate headaches it does a decent job…far better than over the counter pain killers.

After my PCM (Primary Care Manager) appointment I headed straight to my NCM (Nurse Case Manager) appointment. During this appointment we went over how the last week has gone. She mentioned some things she may want me to try such as yoga. She also said after an appointment I have on July 11th, I should be transferred to B company. I'm currently in HHC company, but this company is only for soldiers as they are arriving and in-processing. I'm not sure what will change once in B company other than I'll have a new squad leader and a new NCM…I'll keep my PCM and everything else. My guess is B company will have squad leaders that are a little more in touch with their soldiers because there isn't as much transition going on.

I headed to the SFAC with my laptop. After using their computers to check my army email, I had a seat in their lobby and used my laptop to surf the web and waste time until lunch. I had lunch in the SFAC and then headed to my next appointment.

This next appointment was to meet my PEBLO. This person is the one who will help me through the entire medboard process. She will be the one I go to if I have any questions, she will basically be my guide through this process. My last task of the day was the pharmacy. After my last visit to the pharmacy I was expecting a madhouse, but surprisingly it was not too bad. I got my number and was called up within 10 minutes or so.

I then headed to my car once again and did a variety of things to pass the time…watch a little of UFC 161 on my laptop, listen to music, play on my iPhone, take a nap. The weather changed a bit and by the time I was about to leave to formation it was getting pretty hot! As the summer progresses I may have to find a better place to hang out and pass the time.

Finally it was time to head to our evening formation. This formation is at 1600 and I don't even know why they have it. Half of the time we don't even form up. They never take accountability and it usually only consists of one squad leader coming out and saying he has nothing to announce and we can go.