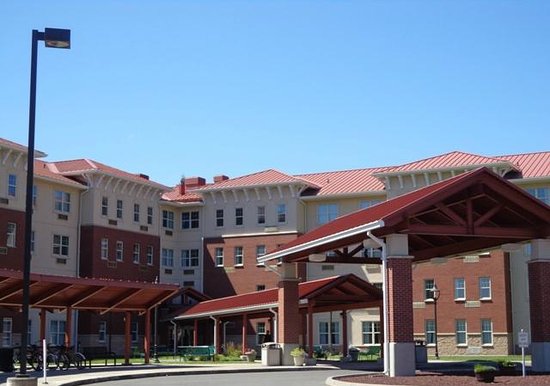 The Rainier Inn on JBLM...the army lodging hotel where
we stayed the first 10 days of arriving.

This morning those of us that did PT went to the gym and worked out on our own. I rode the bicycle and got some cardio in. As I was there peddling I realized that this was the first time I've worked out since the end of March. I went on leave the first of May and then was out-processing once I came off of leave. I need to get back into shape!

I had an appointment with Occupational Therapy at 0900. Occupational Therapy is the place that does what it can to help soldiers in the WTB make the transition into the civilian workforce. They help soldiers in the WTB get internships with federal agencies that can be done while still in WTB. We went over all my limitations and the guy told me about their programs and such. They want to make sure soldiers are busy doing something to help with the transition for when they get out, school and internships are what they are really pushing.

I then started doing some of the in-processing still needed. I hit S-1 and some various other places. When I made it to the finance office, I found out that I actually missed one of the finance briefs the other day. I went to one and then left, but they didn't tell me there was more than one I needed to attend. I still need to get my housing allowance setup, so I can live off post. This stressed me out quite a bit. I was given a number to call to schedule an appointment, but after trying at various times throughout the entire day…they never even picked up the phone.

I continued to get more things checked off my in-processing checklist until 1445 when I had an appointment for my "goal setting" class. I had to set goals for my time here at WTB in six different areas such as professional, educational, spiritual, and such. It was kind of difficult to come up with short term, medium and long term goals in each of these areas. Some of them are kind of stupid like "go to MWR events monthly" under the "social" section. My real goals are just to get through this and get out. I should be able to obtain my bachelors degree before I leave as well…which is one of my biggest goals.

I then headed back to our hotel room where my son was there waiting for me. It was awesome to finally see him after all these months! It is really nice to be home again.