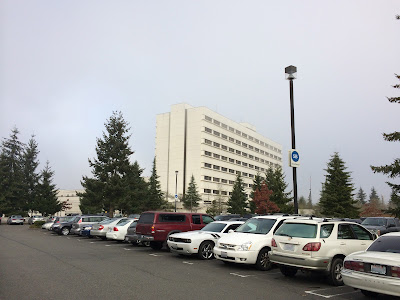 This morning was the first time it has rained during our morning formation. It's crazy because even though it's summer time, it usually rains more than it has lately. I have to say the army…or perhaps this company is just plain stupid. We formed up in the rain standing there getting wet the entire time. People may say stuff like it's only rain and we're the army and we're tough, but actually it's just stupid.

After the formation another squad leader called me over (my squad leader was not there). I was told I had to visit the company HR guy at 0900 this morning. I told him I had the IDES brief at 0930, so he said "OK make it 0800 then". So I go and change out of my PTs and into my ACUs, then head up to see the HR guy. I waited for about 20 minutes, but he never showed up…so I left.

I headed to the IDES (Integrated Disability Evaluation System) brief which was located in the hospital in a meeting room on the ground floor. The meeting went all the way until a little after noon. The entire meeting was basically an overview of what will happen with all of us during the MedBoard process. The VA came in and gave a short brief, then the SFAC came in and did the same, then Tri-Care came in and gave their brief. Finally the legal team came in and gave a long brief going over everything we needed to know. Most importantly they stressed that we should bring anything to them before we sign it. I left having a lot better idea of how everything will work and I'm hoping there will be no setbacks. Their goal is to get the soldier out after 295 days or so. We'll see…it's already day 16 so that gives them 279 days.

On a personal note we became semi-independent today. We slept in our own house for the first time. We don't have a lot of stuff in there yet, but we purchased a coffee maker and we had a mattress in storage to sleep on. We'll still eat dinner and pack our lunches at the in-laws, but we'll be staying in our new house from now on.

Email ThisBlogThis!Share to TwitterShare to FacebookShare to Pinterest
Labels: 25B, Army, IDES, medboard