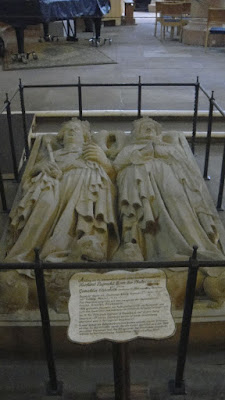 Inside the Church of the Holy Ghost

This morning I met up with the chaplain before his formation at 0750 in civilian clothes. Yup…you heard that right…civilian clothes! Today we are having an event called "Adventures with the UMT" (Unit Ministry Team). It's basically a way to get out of the office and hang out with the chaplain and do something different. It's a great way to see people outside of work, in a different light and also meet their family as well.

There wasn't a lot of people who signed up, which I was surprised. In total there were 12 people, but it also made for a little more intimate setting. People could actually talk and get to know each other a little better. We walked from Campbell Barracks to a street train that took us into the heart of old town Heidelberg. From there we visited a statue of the bunson burner man (Robert Bunsen) who lived here in Heidelberg. We also talked about Heidelberg University (considered one of the best in all of Europe). We then headed to the church of the holy ghost. We had planned to climb up the bell tower and get some views of the city, but it was closed for some reason. Instead we stayed in the congregation area and listed to stories of daring escapes from communist east Berlin into west Berlin back when the wall was up. The theme of this event was personal courage.

We then all headed to a restaurant and ate lunch and then finally headed to the Christmas Market ice skating rink. Only three people participated in the ice skating, but that was fine…they had fun. On the way back to the street train we made a number of pitstops for folks to do a little shopping. I was able to talk quite a bit with a sergeant from our company who works in Mannheim. He had heard about the way I have been treated by the company and was pretty pissed. He has a lot of the same views I do and is upset by a lot of things here. It was good chatting with him and hearing his point of view on a variety of subjects.

We finally got back to Campbell Barracks at about 1600 and were released for the day by the chaplain. I headed home and hung out with my wife for a bit, then got a surprise call from our CAM saying we should all go out tonight. We ended up going to a karaoke bar downtown and it turned out to be a lot of fun. We had 3 other NCOs from the ComSec vault go and one NCO from S-1 show up. They all ended up buying me and my wife a lot of drinks. It was nice to hang out with everyone, we all ended up having a great time. We were responsible and caught a cab back to the base…after grabbing a bite to eat, and then turned in for the night. I can say for the first time in a while I actually enjoyed my entire day and just didn't feel numb while going through the motions throughout the day.