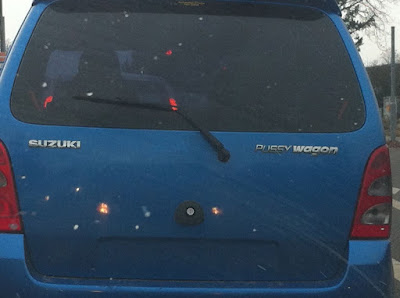 You see some strange things on the road here sometimes...if you don't see it right away,
look a little closer at the model of this car.

Yes it's Monday again, and even though I'm in a better place now, I still have that feeling that I just don't want to go to work today…it's Monday. I'm not going to complain about my "new" position, but just like all the rest I've done in the army, it's not the job I signed up for. Oh well…such is life. I went into my office and after settling in, I headed over to the ComSec office to grab some cleaning supplies. I then started cleaning my office.

I had to leave at 0930 for an appointment. I called the appointment line and scheduled this "Fit For Duty Exam" and when I arrived, I found that they had scheduled me a visit with the dietician. I guess "Fit For Duty" is relative and they thought I was on the overweight program. I'll have to get some clarification from my boss to see what this exam I need is actually called. The dietician was really nice and asked if I had any questions while I was there, I asked what her thoughts on multivitamins were…she like my physical therapist doesn't think they are needed and that one should try and get all their needed vitamins from the food you eat.

So I left there and headed home for a quick lunch before heading out to Landstuhl for my next appointment. The drive is a little over an hour and I took my own car, I don't want to hassle with trying to get a TMP. The appointment in Landstuhl was with my neurologist. She asked how everything was going, I told her that the shots didn't really help and that I still feel pretty much the same. I will now have to make an appointment with "pain management". I guess they will try a few things and in a couple months I will see my neurologist again to go over how the treatments go. If I don't see any improvement she said we'll talk about whether I should stay in or get out. To me that is really a no brainer…I want out. I have degenerative disks and a bum knee. I don't think just making the pain go away is the answer. No pain would be good, but it would then mean I would be doing more to make myself worse in the long run. If they can't fix the problem, I don't want to do anything to make it any worse than it is.

By the time I got back from Landstuhl I had a few minutes to change and then head to PT at 1600. Everyone headed to the gym and did their own workout, some were going to play basketball after about 30 minutes or so, aarrrggg…I wish I wasn't old and broke, but unfortunately I think my days of ever playing basketball again are over.