Saturday: Had to wake up at 0610 this morning in order to get ready and video chat with my wife a bit before heading to the USO. We had to be at the USO by 0730 for the DMZ (Demilitarized Zone…A.K.A. the boarder between North and South Korea) tour we signed up for. By we I mean, me, the young hawaiian & his buddy, the air force master sergeant in my office and PFC Pickle. We all arrived there except for PFC Pickle. He had called me last night and was sounding a little iffy. I tried calling him, but he didn't answer. There is a waste of $35 for him.

We all signed in and boarded the bus. It was a full bus and we headed out for the drive towards the DMZ which took around an hour. Our tour guide on the bus talked to us most of the way giving us a number of interesting facts. When we arrived near the DMZ at an army base, we switched buses and an army soldier boarded with us and took over as our tour guide. We headed up to the JSA (Joint Security Area) which is where any diplomatic talks take place. In most areas of the DMZ there is 2 kilometers on each side of the line that is uninhabited, but the JSA is an area where both sides come together. We were shown the conference room where diplomatic engagements take place. This room is actually right on the boarder of the two nations, so I was able to "step into" North Korea by going to the far end of the room. I can now add that to the list of countries I've been to…LOL. I was hoping to see a number of communists today, but unfortunately they only had one out and ironically he was taking our picture. We were told there were a number of North Koreans in the various buildings keeping a watchful eye on all of us at all times.

We then headed off to see some other various sites such as the "bridge of no return" and heard about all the various incidents that have occurred here since the war ended. It was all very informative and pretty interesting. After stopping at a few different places we headed to a place called "The 3rd Tunnel". This was the 3rd infiltration tunnel the South has found that the North has created for a surprise attack. Up until now they have actually found 4 and suspect there may be up to 16 more. We were able to walk down and actually check out the tunnel itself. It was quite a walk down and up. It's pretty crazy to think that this was even built.

Our last stop was an international railroad station called Dorasan Station. This station was built when relations were warming up between the two Koreas and the plan was to have a train travel all the way through North Korea and allow people to eventual travel to China and Europe. Relations soured after a North Korean soldier shot and killed a South Korean woman and the station was never used except for a few test runs. It's now basically only a tourist stop. I found it very strange to walk through the station. It was all quite and empty, but all the electronics were on. It was like some movie where all the people just vanish, or perhaps a zombie movie where all the normal people have disappeared. Either way it was an odd feeling walking around the place. There was a gift shop there, but that was about it.

We then headed to lunch and returned. I think most of the folks including me slept most of the way back. The trip wore everyone out. We arrived back a little after 1600. I headed back to my room and did some schoolwork. I then met up with the young hawaiian and we went to the movies since they are still free this month. We watched "The Eagle". It was a decent movie about a roman trying to regain his family's name after his father lost a legion of men in England. I'm glad it was free though, it's a movie that I would suggest putting in your Netflix queue, but not spending the money on renting. It was no Gladiator.

I then went back to my room and drank my bottle of communist beer that I was able to purchase during our trip. Surprisingly it wasn't too bad. After that I ended up doing some more homework before going to sleep. 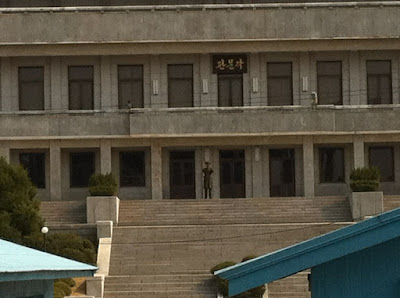 The lone communist I was able to see this weekend

Sunday: I slept in…always nice. I then did laundry and had a chance to video chat with all my kids and my wife for hours. Gotta love it when that happens. I really hate being away from them for so long. I start to feel very guilty at times for not being there and being with them. I hate hate hate being apart.

The rest of the day was pretty mellow. I just did schoolwork, went to the gym and worked out, then came back and did more schoolwork. I then watched some TV and called it a night.