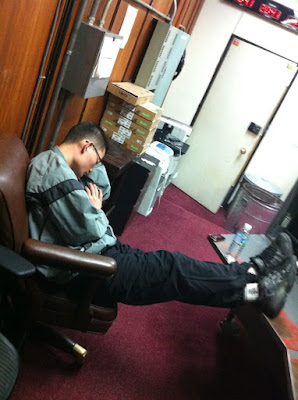 Our KATUSA asleep in the conference control room

Work call this morning was at 0800. I woke up with a stomach that was not happy with the mixture of Makkoli, soju, and roasted duck from the night before. Even though I tried to drink a lot of water and took some aspirin last night, I still felt a little queasy. I drank some more water and then got ready for work. Surprisingly my sergeant was at work and didn't look like he was suffering too much. He even said we would be playing basketball at lunch today. I didn't really want to play, but I was hoping that I would feel better as the day went on.

I helped setup a meeting and then headed to our admin office to check on a laptop. When the help desk reset all the local admin passwords they were unable to reach a few and we wanted to research why. We figured it out and I told him he could close the ticket because I could fix the others that were still out there and needed to be fixed.

I then went to TMP our office car with Special K, but when we got to the car, the doors would not open with the remote. It turns out that Special K left the hazard lights on last time he parked the car, so the battery was dead. Special K had to get his car and we were able to jump it and get it started. After that we were able to check out the office car for another week. When we got back I headed up to my room and changed for basketball. I was feeling quite a bit better, but not a 100%. When we got out on the court I could tell my sergeant was nowhere near 100%. That soju did a number on him. We had another guy playing with us for a few games of 21. I just couldn't miss any shots it seemed. The guy playing with us was a younger very athletic black dude and he ended up stuffing me a few times, it seemed that those were the only ones I missed. I ended up winning all the games except for one. I was able to get in one good stuff on the young black dude as well which is always good.

I then showered in my room and ate lunch. After lunch I headed to visit our supply sergeant since she is on the way back. She asked on Monday if I could take a look at her email because she was having some issues. I came in and she looked at me like "why are you here". She then said she had to leave and asked if I could come back later. It was very strange, I got a really weird vibe the whole time there and I can't quite place why. Usually when I go to help someone they are appreciative, but this was just strange to say the least. Needless to say I didn't go back today.

We setup for a meeting in the secret conference room and Special K said he overheard our sergeant and the new captain talking. This new captain is all hooah hooah and Mr. Super Army Man. I’m going to call him CPT Hooah. I guess he wants to make a lot of changes. A number of things were overheard such as uniform inspections, haircut inspections, ruck marches with 50lbs going many miles. He needs to just do his paperwork job and let our sergeant handle our training. I know I shouldn't let rumors bother me, but hearing all that BS just made me lose all my motivation. I went to our conference control room and took a nap. When I woke up I installed the active directory tools on the computer up in our office there. Now I can poke around and see how things are setup as far as users, groups, and computers here in Korea.

We then cleaned up the secret conference room and the office and took off. The young hawaiian called and asked if I wanted to play basketball with him. The last few times he called I haven't been able to do anything with him, so I said sure. We met up at the gym and just as I was about to play we were invaded by a bunch of women (and a few dudes who may have been gay) for a Zumba class. I'm starting to hate Zumba…they seem to have it at all the times I want to play basketball. We left and I went back to my room to do some schoolwork and then a little reading of a book I just got in the mail. I ordered it from Amazon a while back and it finally arrived. It's called "The Fleetwood Mac Story - Rumours and Lies". I've been a huge Fleetwood Mac fan for a long time and I thought it would be cool to read a little about them. I'm hoping the book will be good.

Well McGuire, I have found your entries to very useful and insightful. This will probably be the last time I will be able to read your posts for about two months as I will be starting BCT at Benning very soon. If you get a chance to read my entries, I hope you find my BCT journal about as amusing as I did yours.

Great...good luck at Benning. I'm looking forward to reading all about your experience.