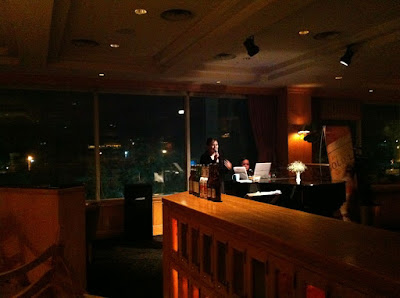 Our view of the Filipino band playing at the hotel bar

Work call this morning was at 0830, a nice way to return to work. We only had one meeting scheduled and it was more of a performance than a meeting, so all we had to do was put out some seat covers with name tags and setup the flags in the conference room. The only meeting was also scheduled at 1400, so we didn't have any rush when we first arrived.

The first thing I did was update the events calendar. Usually if I'm not there the air force master sergeant will do it, but he was gone as well, so it really didn't get done all week. Events change almost daily so it needs to be updated daily, luckily it's a really slow week. We then did spring cleaning for the office. This involved lots of Windex, Pledge, and vacuuming all over. Once we were finished our sergeant wanted us all to watch an HBO series he just got on DVD. It's called "Generation Kill". We hooked everything up in our conference room so we could watch it…it was almost like being at the movies. :) We watched the first episode and it is basically about a marine unit during the first days of the 2nd Iraq war. The push in from Kuwait and see some pretty crazy stuff. Since it's an HBO series it can get pretty graphic. After the first episode our sergeant ordered us all lunch from the navy club to celebrate SPC Roy's last day in our office. Starting Monday he will be in another office actually getting some training for his MOS which is 42A (Human Resources Specialist). Like everyone else in our office, nobody actually does their MOS because the army doesn't have a coffee server MOS, so they just usually stick 42As in our spot…I'm just the lucky one. We then watched another episode before we had to setup for the upcoming meeting. The series is pretty good, I may have to borrow my sergeant's DVDs so I can finish the first season now that he got me hooked. I guess it eventually goes on to deal with how the war affects these young marines and how it changes their lives.

I then ran some errands with SPC Roy in his rented car that he picked up for this weekend. It's a Kia, but it's really nice. Lots of technology built into the car. When we got back I helped SPC Roy and SPC Mick get on the correct site so they can do their IA training. SPC Mick has to do it for the first time and SPC Roy needs his annual refresher. I now get notices of folks in my office that are close to expiring.

We then had our safety briefing…don't drive drunk, always have a battle buddy, call someone if you find yourself in trouble…etc. I then went to my room and did a little schoolwork. Once I finished SPC Roy came and picked me up for our road trip down south to a city called Jeonju. This city is about 30 Kilometers away from his father-in-law's place where he will be helping them plant rice. I'm just along to keep him company. The trip took about 3 hours and we only missed one turn, which is amazing because we actually had two GPS units going. After we arrived at the hotel we checked in and then checked out the bar. It was a little after midnight and the place was pretty empty. Here we sat in a Korean bar with a live Filipino band singing classic American songs in English. We each had a couple drinks and then retired to our room. Tomorrow I have to do a lot of schoolwork while SPC Roy works in the rice fields.