Work call this morning was at 0800. I don't mind 0800 or 0830 because it gives me time to get up early and video chat with my wife. When I arrived to the office we setup for a couple of KUB meetings. One in our conference room and one in the top secret conference room. This had us a little busy at first since they overlapped. We did a little planning yesterday before we left and setup as much as possible in our conference room.

After flipping slides for a while in our conference room I had SPC Mick take over and I went down to our office to get the car and take off to get my passport. When looking for the keys I found out that Special K was driving our colonel around, but would be back shortly. I updated the events calendar and then started looking for my beret. WTF? I couldn't find it anywhere and I can't go outside without it on. After looking around the office and going back and forth to the conference room control room I finally found it. Sometimes it can be hard to see things during conferences because we turn off the lights in the control room for better projection on the screens.

I headed out to the US Embassy on post with all the documents I needed. I had my photos, my money order, my application,  a copy of my birth certificate and copies of the court documents for my name change. When I arrived I was told that I can't use copies. I told them all of the original paperwork was in storage, they didn't really care so I left empty handed. Looks like I will not be traveling to any other country while I'm here other than the US. This really pissed me off to no end. I'm so tired of nothing ever seeming to work out. It seems every time I try and have any paperwork processed in the army, there is always roadblocks or the paperwork simply vanishes. I'm so sick and tired of it. This wasn't necessarily the army, but it is just the same as I've been dealing with since joining. I have no faith in any paperwork the army has in it's possession. Each soldier is encouraged to make an "I love me" book. This book is used by the soldier for the sole purpose of keeping originals and copies of every single important document that they ever come across in the army. This is done because all too often paperwork gets lost. It's pretty sad that is the case. Anyway, let's move on…

Me and Special K headed off to check out a framing shop located in Iteawon (which looks so different in the day). They are cheaper than the one we use on post, but they are slower as well. (Our office also puts together a number of awards and such and frames are always being ordered). In this case like most of the time the frames were needed right away. We ended up getting them from the arts and crafts store on post which would have them all ready tomorrow after lunch.

Speaking of lunch we met up with SPC Roy and ate at the food court. We got caught up on all the gossip and then headed back to work. We cleaned up the conference rooms, then I did a little SkillPort before watching a little NBA. We then got ready to head over to the 8th army building to setup for a conference there. Before we headed out CPT Hooah! looks at SPC Mick and states "you're going to get that fade before Monday right?". He was talking about getting the hair cut shorter on the sides and have it fade up to the longer hair. The first time he mentioned this I thought he was joking because like me SPC Mick shaves his head once a month. Currently it's still pretty short, but I guess not short enough for CPT Hooah!. That means I'm going to have to cut my hair every two weeks so he doesn't say anything to me. Just another annoyance to deal with.

We made it over to the conference room and had everything setup, then minutes before the meeting they want to move people around. Then they want to add people and remove others. WTF? We come over with pre-printed labels, it's not like I can shit one out for them. Sometimes people can be so stupid. We headed back and our sergeant gathered us all together go go over the schedule. I guess we are going to do some weapons training tomorrow to get ready for the range which is scheduled for next week. Also our PT test has been rescheduled for May 12th. That will be good because once I get both of those done, I can put in for leave.

After work I headed to my room and had some trail mix for dinner. I may be turning into a squirrel. I watched some TV shows and then logged on to do some schoolwork only to find out that my new class doesn't start until next week…cool I get a little vacation. 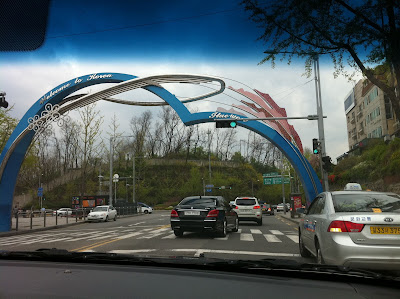 Itaewon in the day looks much different 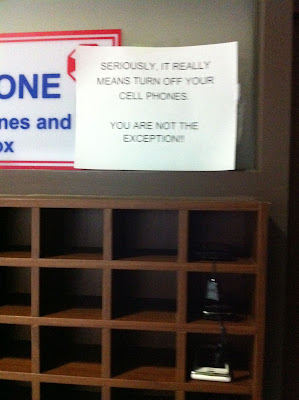 In the 8th army building...You are not the exception!!

The title of this one suits the writing. Sounds like you are getting just a little frustrating. Sorry, wish I could help. This one also was a pain copying. Had to copy and paste most of it and could not print any of the pictures except the top one of the statue. The top one always seems to print fine. love you

So much for trying to be creative.