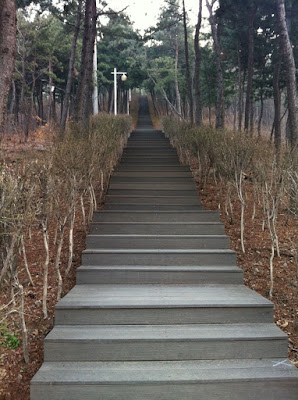 Work call this morning was at 0650. We met at the office in civilian PT clothes along with our assault pack filled with whatever we could stick in it. Our sergeant said he wanted at least 20 pounds in it. This morning our PT was going to be a hike up to Seoul Tower from our office. We were all there except for our new guy SPC Mick. Our sergeant asked where he was and Special K gave him a call. SPC Mick says "I knew we were hiking up to Seoul Tower today, but I didn't know when". OMG! …and he didn't think to ask. Our sergeant told him just to get ready and go to the office. I sure hope we all don't get "corrective training" for this.

No worries…we headed out, our sergeant, SPC Roy, Special K, two sergeants from the command group, and myself. We started off on the streets of Seoul once we were off post, and it was all pretty much uphill from the start. Once we arrived at what I guess is the base of the main hill, the city kind of stopped and it was just a main road and a number of trails. We picked a trail which led to what looked like a never ending staircase. After the top of the staircase we took the road the rest of the way up. Once we got to the top we rested for a bit, took in the sights and then headed back down. The view would be much better if there wasn't any smog around. We headed back down a different trail, and when I say trail, that is exactly what it was. There were moments I thought I may start sliding down the hill, but luckily nobody fell or got hurt. It was good exercise and it was nice to do something a little different for PT. The whole hike took almost two hours including the break at the top.

After we got back me, Special K and SPC Roy headed to the Dragon Hill Lodge to grab some breakfast. After some breakfast and coffee I headed back to my room to shower and change into my uniform, then headed to work. There were no meetings scheduled for today, so I updated the events calendar and checked my email. I then worked on some SkillPorts and was able to finish 2 of them before I was told we could clean up and leave early….nice!

I went to my barracks and started schoolwork. When I finished schoolwork for the night I decided to watch Rambo 3. I was surprised, but I had never seen this one before! Interestingly it takes place in Afghanistan during the time when the Russians were fighting there. Kind of interesting how things change and now we're the ones fighting there in real life. The movie has Rambo going in and rescuing his old commanding officer and friend Colonel Trautman. Rambo ends up rescuing the colonel and helping the rebels defeat the Russians. Now I know what turned the tide of the Russian war in Afghanistan :). It was your typical action movie with lots of things blowing up, guns firing and blood spurting.

I found out I have an early work call tomorrow for some mandatory EO training, doesn't sound like that much fun.