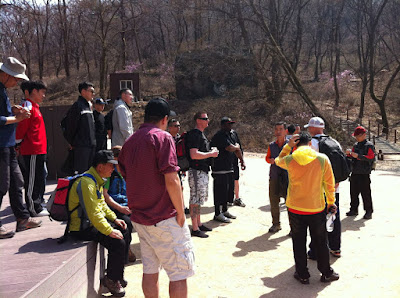 Our group at one of the first breaking points during our hike.

Work call this morning was at 0800. We had our normal weekly Wednesday meeting in the secret conference room. I ran both the unclassified and the secret laptops for the meeting. I finally got my account all setup and straightened out, so I can now log into the secret network without issues. It's about time…I've only been here for over 4 months now.

We boarded a bus and went for a long ride through the city of Seoul. I am starting to think it's the city that never ends! We drove for about an hour and a half before we finally reached our destination "Bukhansan National Park". The hike started off with a very steep incline and I was a little worried that it was going to be a long tiring day. Once the first initial climb was over however it turned into a very nice hike. There was plenty of scenery with lots of gorges and peaks to check out. It's also spring time, so the trees and flowers all added to the experience.

We stopped a few times for some pictures and some speeches by the ROK sergeant major about this bonding experience. It actually was pretty cool to get out and see folks away from work. I learned there is a ROK military unit that is stationed in this area and does a lot of mountain training. We could actually hear them echoing through the mountains.

At the end of the trail our bus was waiting for us and we all boarded for a short trip to a place that had a sauna. The ROK sergeant major invited everyone in, but I think only Koreans ended up going in. There is something about getting naked and sweating next to a bunch of dudes that Americans just don't get. We were near either a training area or housing area that was created for the 1988 Seoul Olympic games which was pretty cool. When the ROKs all got out of the sauna we all went to a restaurant. We sat on the floor...traditional Korean style as a big group. I was a little worried that I wouldn't be able to get back up! The ROK sergeant major paid for everything. We had dinner, makole & soju along with roasted duck and kimchi. We cooked the duck ourselves a the table, very similar to the Korean barbecue I've had before with the lettuce to wrap it up in and the sauce to dip it in. It was all very good. I had only planned to drink a couple glasses of makole, but there were a number of toasts and some of them were mandatory soju toasts. It was all a lot of fun and a pretty good bonding experience. In fact it may have been a little too good. There was a Korean dude next to me that said my eyes were beautiful. He assured me he wasn't gay, but throughout the night I got a couple shoulder rubs and a pat on the butt while going pee in the bathroom. He's a little suspect…but I'll chalk it up to different cultures for now.

My sergeant was feeling extremely good by the end of the night, in fact he needed some help getting off the bus and back to his house. Luckily a sergeant from the command group was able to give him a ride. I went back to my room and spoke to my roommate and his friend for a while. I was sure to tell them all the new bad Korean words that I learned….lol. 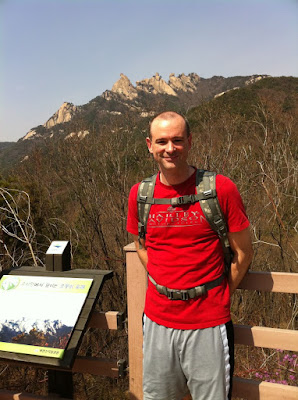 Me standing in front of the scenic peaks in the distance 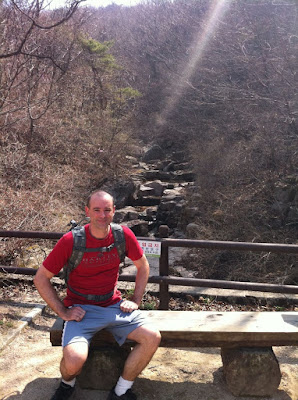 Me and some more scenery 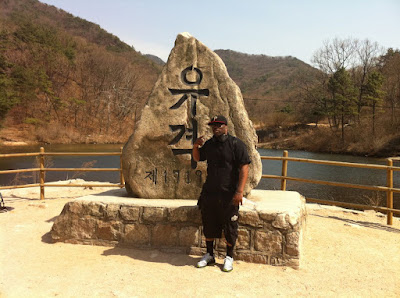 My sergeant posing next to a big rock 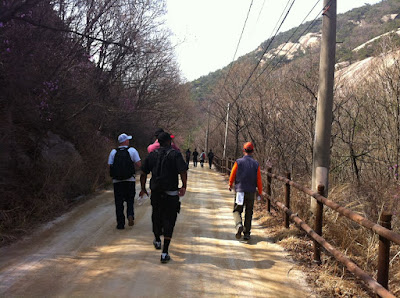