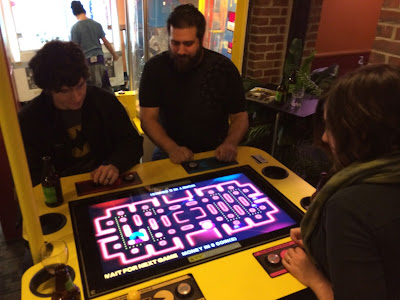 Pac Man Royale...we played this quite a bit at GameWorks in Seattle

We decided to have our Valentines celebration on Saturday. A few of our friends were going out to Seattle and invited us to join them. I started the day off getting my schoolwork done so I wouldn’t have to worry about it later. We caught the ferry to Seattle around 1500. When we all arrived in Seattle we hit GameWorks first, which is sort of like an arcade for adults. We played some games and drank some beer. We all had a lot of fun playing “Pac Man Royale”, a twist on the classic Pac Man game, but with up to four players all competing against each other.

We then all had dinner at PF Changs, can’t help but think of my battle buddy from basic and AIT, PFC Metal and his wife when we eat there. The food was awesome and everyone enjoyed themselves. We then went to another bar called Olivers and met up with some former co-workers of ours from The Wenatchee World. We all had a few drinks and then hit our final destination…a strip club. I guess it’s a tradition of our friend to always go to the strip club with his girlfriend on Valentine’s day. Kind of odd, but I was down with it…I’ll never turn down naked chicks. I don’t know what I expected, but I guess anything after the clubs we visited in Amsterdam is going to be a bit lame. We caught the last ferry home at 0050, which is always filled with interesting & entertaining people!

We took it pretty easy on on Sunday. I checked my weight and saw that I only lost 1 pound this week…well I was hoping for a little more, but I guess anything in the negative direction is good news. We went to my in-laws and hung out for a while. We had lunch and did a little laundry while we where there. When we came back home we watched a Netflix movie. We’re now so far behind from being in the army, we kept adding movies to our queue, but in Germany it would take a good 4-6 weeks to get a movie after sending one back. Now we’re getting them a lot faster and trying to catch up a bit. Tonights movie was “The Air I Breathe”. This was a strange movie. Lately it seems I don’t even remember half the movies I stuck in our queue because it was done so long ago. This movie was packed with stars such as Brendan Fraser, Sara Michelle Gellar, Forest Whitaker, Andy Garcia, & Kevin Bacon. I can’t say this was a particularly great movie, but it was interesting. The movie takes the viewer through each of the characters lives and how they affect each other. Definitely a movie not worth seeing at the theatre, but good enough for the Netflix queue.

On Monday my wife had to work, so I stayed home and took it easy. I did some schoolwork, cleaned up the house a bit, and started checking the web for a new job. I got a call from a technical recruiter, but they needed someone to start March 3rd, still a little too early for me. I should be around 90 days out at the most…I should know more in a week or two.

When my wife came home we headed to the YMCA and had a good cardio workout.