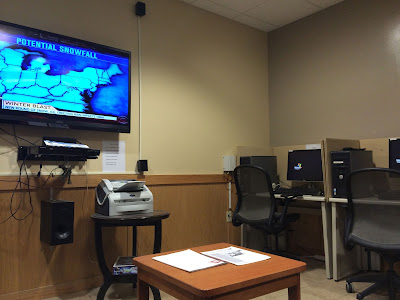 A photo of the common area in the WTB Barracks.
I'm sitting on the leather couch looking at the TV,
but there are also PCs that can be used by the soldiers as well

This morning I headed to morning formation in ACUs because I had an NCM appointment at 0800. It was so freakin’ cold! Some folks had their polar fleece on that was issued to them, but all I could do was wear my army issued long johns underneath my ACUs. I had to turn in my polar fleece when I left Germany. That was probably my favorite part of the uniform! The appointment folks fell out and headed to the rear of the formation, then waited for the first sergeant to come and ask each one of us when and where our appointment was. Once I told her, I took off and went inside the barracks building. It was going to be too cold to hang out in my car even with my blanket. I went to the common area of the barracks and hung out on the leather couch and watched some TV. The couch was pretty comfortable, I think I may have dozed off a few times.

At 0800 I went to my NCM appointment. Everything was pretty much the same as before…same questions and same answers as every week. I did have her order me a new refill for my muscle relaxers, but had her schedule it for pickup next Monday when I’ll be back. After that I headed to the SFAC and checked my email. I also checked my MedBoard on AKO, but for some reason the numbers are all messed up still. I guess we’ll see if anything changes in the next couple of days. After surfing the web for a while, I headed out to my car and grabbed my paperwork for the FTR at 0930. I had to make up 6 copies of my transition plan for everyone that is going to be in this meeting. I was waiting in the lobby and my squad leader came out and said we could start early…fine with me.

I sat down at the company conference room table with my squad leader, my NCM, a social worker, the company commander, and the battalion commander. I then handed out my sheets and told them my plan for transitioning out of the army. I’m almost finished with school, I have plenty of work experience and I don’t anticipate any issues finding a job. They could tell I had a good plan and had everything together. They only had a couple of simple questions and then I was out of there. The meeting is scheduled for at least an hour, but I was done in less than 15 minutes! They are used to having kids with no life experience except the army in there. Kids that have no idea what it’s like to be in the civilian workforce. I’ve been there and done that for over 15 years in my field.

I went to the library and did schoolwork until lunchtime. I ate lunch in my car and then drove to the WTB parking lot. From there I headed to the pain clinic and had my chiropractic appointment and then my acupuncture appointment. This time had me on my stomach with needles in my wrists, down each side of my spine, my ankles and the top of my feet. It’s actually a pretty relaxing experience once all the needles are in, the music is playing and the lights are off. I was on the verge of falling asleep the entire time.

After acupuncture, I drove home where I met my wife and we headed off to the YMCA. I worked out on the elliptical and upped the speed a bit. I wanted to get a better workout and push myself a little. The problem, even with no impact on the elliptical is that when I push myself, I pay for it later on. Not with sore muscles, but my neck and my head just seem to get worse and worse as the night goes on. I’m kind of stuck between a rock and a hard place. I want to work out and get back in shape. I want to lose some of this weight I’ve been packing on, but when I exert myself too much I’m in pain for the rest of the night. It really sucks. I took a muscle relaxer to make sure I at least slept well.