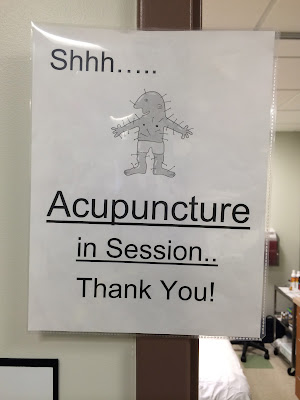 The sign on the door where I get my acupuncture done...lol

This morning’s formation was pushed back until 0900 in ACUs. I knew I was going to be at the pain clinic with an acupuncture appointment, so I sent my squad leader a text letting him know. I was able to sleep in a bit and head in much later than usual, which was nice for a change. I had a 0800 acupuncture appointment and a 0945 chiropractor appointment in the pain clinic. While waiting for the acupuncture appointment, the chiropractor saw me and quickly took care of my appointment with him. He had me lay down and did the usual neck manipulation, which only takes a few minutes. I then headed into my acupuncture appointment. I walked on the plastic rocks with just my socks, then laid down on my back on the exam table. This time I got needles in my forehead, my forearms, my wrists, near my knees, my ankles, and the top of my feet. This was a bit more than I’ve had before, but I couldn’t even feel most of them. I laid there with the lights off, a heat lamp over my right knee, and relaxed for about 15 minutes.

After the appointments I headed back to my car and just listened to music. I brought my iPad to read and my laptop to use to pass the time until my last appointment for the day which is at 1300. This appointment was a cognitive health group appointment at the pain clinic. There were four of us in the group. A navy captain was the instructor. She went over a lot about how the mind can affect the body. She had us do a few mental imaging exercises and then discuss our reactions and feelings. As an example of how the mind can affect our body, she had us imagine holding a lemon in our hand. She described the lemon thoroughly and then had us picture the act of cutting the lemon in half. Once finished she had us picture taking a bite of the lemon. The point of the exercise was to show that just by thinking of the lemon and picture the biting of the lemon, it caused everyone’s mouth to salivate. There was no physical lemon and there was no aroma of a lemon, but picturing it in our mind can affect our body. She did a little more talking about the mind and body, then gave us some ways to try and focus away from the pain.

After the class, I drove to the Subaru dealership and dropped of my car for some maintenance. It needed an oil change and all the belts needed replacing. I’m way past due because of our time in Germany. The dealership may not be the cheapest way to do it, but the oil changes are free for life and they gave me a complementary loaner car to use while mine was in the shop.

I then went home and did some schoolwork. Once my wife came home we headed to the YMCA. Now that all the new year’s resolution folks have probably quit, we need to start getting back in there. I used the elliptical and got a decent cardio workout. My wife and I are also going to start eating better. Part of that is getting more vegetables in us. We have a Magic Bullet blender and found a green smoothie recipe online to try. It was fill of kale, celery, green pepper, green apple, broccoli, ginger, and some lemon. I was expecting it to taste pretty bad, but it really wasn’t. I can’t say that it tasted great or anything, but it was very manageable. Being the first time I have tried this, I need to let it blend quite a bit longer. It was a very thick smoothie that I kind of had to chew before swallowing. We’ll probably mix this recipe up a bit, but at least we’re getting some good nutrients in us.