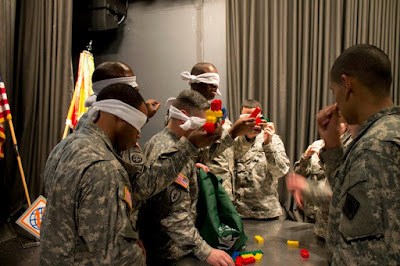 An exercise in communication...teams trying to build a lego structure.
The builders were blindfolded and the supervisors could
not communicate with their mouths.

This morning I headed out a little early, my wife dropped me off at my office a bit before 0630 where I met up with the chaplain after his formation. We were unable to get a TMP to drive up to Days of Excellence which is being held in Ramstein, so we took his car. He wanted me to drive…the good news is that it's a BMW, the bad news is that I didn't bring my GPS. I get lost easily once I leave our immediate Heidelberg area. We only had to double back once on the drive there. Once we arrived, I took a seat next to SPC Mac and some others that I used to work with back in the ComSec office.

The ceremony started off with some awards and promotions. One specialist got an army achievement medal for saving another's life while in a restaurant. He stated "I want to thank SPC so and so for choking and CSI Miami for teaching me the Heimlich Maneuver" LOL. We then went on to some required army training. The topic of the day was SHARP (Sexual Harassment Assault Response and Prevention). The first module was the same ol' PowerPoint presentation that we usually get along with the same slides we see over and over again. The training itself was actually not that bad all because of the enthusiasm and the motivation the sergeant had while giving it. The second module was unlike any army training I've had before. The topic was on communication and instead of using PowerPoint, the trainer picked five lower enlisted soldiers to head up on stage and five NCOs or officers to join them. The lower enlisted were the "supervisors" and the NCOs and officers were the builders. The supervisors were shown a building (an assortment of large legos put together) and had to tell the builders how to build it. The rules…builders were blindfolded and supervisors could not speak. It was pretty funny to watch. The supervisors were stomping and clapping and the builders didn't have a clue, in the end I think they didn't even get the base put together. The trainer then went on to go over the many aspects and feelings people have when trying to communicate. It was nice to do something a little different and I think everyone got something out of it.

After the event we all had to stand outside in the rain and cold to listen to our commander and first sergeant give us a safety brief for the weekend. It's super bowl weekend and they don't want any issues to arise. Every time we thought it was just about to finish the other would start talking more and more about being safe. This went on for a while and the commander also promised that if the company goes 81 days without any incidents, he and the first sergeant will work some shifts for the soldiers…that would be funny.

I drove the chaplain to the hospital first, so he could get some contact info for the chaplain there. He also bought me lunch at the DFAC there and we had a decent meal. I don't know why, but it always seems as though that the hospital DFACs have the best food. On the drive back the chaplain fell asleep and I ended up taking us through a detour through the middle of Mannheim. I finally found some signs to head towards Heidelberg and we eventually made our way back. I think I may just keep my spare GPS in my office, so I'll always have it no matter what from now on.

When I arrived back I ran some errands for the chaplain here on post, then headed home. I ended up getting a text from my boss later on asking if I wanted to have a few beers with him at the bowling alley…no problem. We had some beers, played some darts and just hung out and talked with a couple other NCOs from the maintenance side of the ComSec office. It was a pretty good night. 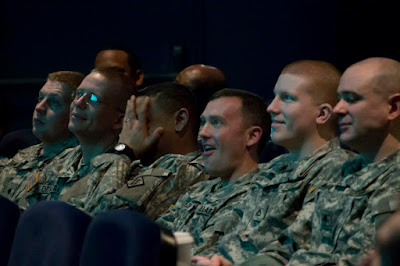