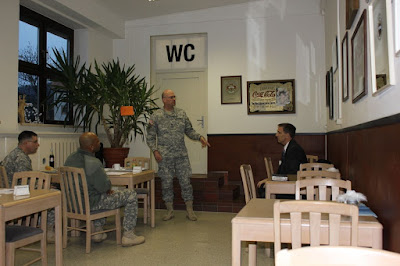 The chaplain starting off the prayer breakfast

This morning I didn't go to PT, instead I headed into my office to get ready for the prayer breakfast. The chaplain and I gathered the paperwork and headed over to the German Cantina on post. There was a side room reserved for us and I setup each of the bulletins in front of each chair, then waited. The chaplain offered to purchase me breakfast, but I had already had some at home…I didn't know exactly how much time I would  have to eat, but I did grab some coffee and orange juice. When the prayer breakfast actually started only 3 people actually showed up, not counting the two chaplains, the singer and myself. I guess I didn't need to have so many bulletins printed off! The event still was nice, the singer played his guitar and sang a few songs. The guest chaplain gave a little speech about personal courage, then our chaplain said a prayer. I used my camera to take a few snapshots during the event for the chaplain, then we packed up and headed out.

I headed home, hung out with my wife for a bit then took her to work. I went back to my office and did the usual administrative type stuff until about 1100. Now it was time for the Adventures with the UMT Paintball event. We had reserved the paintball field for the soldiers to use and play paintball on from noon until 1600. We arrived along with a TMP full of soldiers from Landstuhl. Unfortunately the place said it was too cold to use their compressor to fill the guns, so we had to cancel the event. It was snowing and well below freezing, so I guess it was probably for the best. Our platoon sergeant said everyone could go to Patton gym and play basketball as a consolation. We headed over and I shot around with everyone. It felt awesome to play around again, I was in the groove nailing 3's from all over. Everyone decided to play a game called "bump", which is basically a shooting game. Two people start at the three point line and shoot, the object is to make your shot in before the person in front of you to knock them out of the game. If you miss, you can chase down your ball and still try and get it in before the other person. As soon as you make it, you throw the ball to the next person in line. This process keeps going and going until one person wins. We played a number of games and I was able to win a good majority of them, it was a ton of fun. It really made me miss playing basketball all the time.

I then went back to my office and ended up doing my schoolwork. At about 1600 I heard the HHD company was having their safety brief and then getting released for the day. The chaplain never came in, so I decided to just leave as well. My wife was at work, but still feeling pretty sick and wanted to be picked up…no problem. Not too long after I got home, I started feeling the affects of playing basketball today. I thought just shooting around wouldn't be a big deal, but I was wrong. I guess the "jumping" part of the "jump shot" really got me. My back hurt, my knee was throbbing and my head was killing me. It was one of those times I wish they prescribed me some heavy pain killers. Instead all I could take was some Excedrin, some muscle relaxer, and some scotch. I learned my lesson and I will not being doing anything like that again! 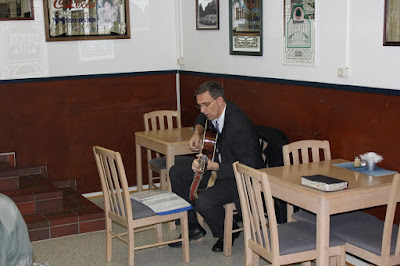 The singer offering up a little entertainment during the prayer breakfast