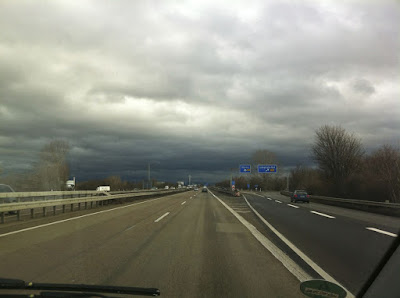 PT this morning was a little odd. It was combatives, which meant that I just came in my normal uniform, sat in the bleachers and watched. It was scheduled for 2 hours which meant 0630 to 0830 in the morning. The funny part is that the platoon sergeant was sick as a dog and left after we had accountability. The normal combatives instructor (SGT Steroids) was on staff duty, so they had another sergeant teach it. Let's just say that this sergeant is the last person you would expect to teach anyone combatives. They started and after about a half hour everyone stopped and took a smoke break. When they came back in they shot some baskets on the basketball court…I joined in on that venture, something I can do. Then they went back to combatives. Basically all their combatives training was just picking two people to square off and see if they could submit the other within 2 minutes. Once everyone had done it again after the smoke break, we cleaned up and went home. We left earlier than planned, so I was home a little before 0800 and didn't have to be back to work until 1000.

They had planned on doing the same classes for sergeant's time training, so I just headed into my office. I had to prepare for our events tomorrow, check my email, and make sure the TMP was gassed and ready to go for today. After that I headed to Subway and picked up a sandwich. I ate it, then headed to a mandatory lunch with the brigade CSM (Command Sergeant Major). He was down to visit Heidelberg and instead of having a mandatory meeting, he decides to force everyone to take their lunch break and spend it with him. Lunch is not provided, we have to bring our own. To me that just seems like a guy with an ego trip. He talked about "go army" stuff, the coming budget crisis and how it will affect everyone. It was hard to hear everything because the noise in that room echoes a lot and the CSM kept walking around sometimes talking with his back to people. I sat through it patiently, then when it was over I split. I had to be at the TMP at 1300 to take the chaplain to Landstuhl. On my way out a first sergeant told me to stop and help put away all the chairs. At first I didn't realize he was talking to me and I just kept going. He sent someone running after me to stop me and have me come back. I let them know I'm currently "on a mission for the chaplain"… in retrospect I should have said "I"m on a mission for God"…that would have been funny. They guy turned around and went back and I kept going. Something about that whole event just pissed me off. It's not like I was trying to get out of putting a couple chairs away, I needed to get a move on.

I had the TMP ready to go when the chaplain came out and we headed off to Landstuhl. When we arrived, he went in and did his thing with the soldiers and I delivered some boxes I brought up for the supply sergeant. I then sat in the van and did my schoolwork. I must have been tired because at one point I fell asleep reading my textbook, but I was able to finish my chapter before the chaplain came out at 1600. We headed back to our office and I readied some paperwork for the Prayer Breakfast tomorrow morning. I headed home about 1730 to take care of my still sick wife.