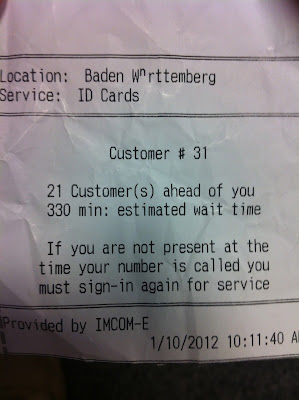 Government efficiency at it's best....I waited pretty much the entire day to get served

Woke up today at 0700 and got ready for the day. I still wasn't sure exactly when I was going to be picked up, but after the sergeant dropped me off yesterday I had a better feeling that I wouldn't be forgotten again today. At a little after 0900 the sergeant came and picked me up and we headed to Central Processing. I had one place to go…the ID card section. I grabbed a ticket a little after 1000 and saw my number was 31…after about 15 minutes I heard them call number 10. That's when I knew this was going to be a pretty long day. The sergeant that picked me up texted me about a half hour later and I went out to talk to him. We headed to the hospital where I was able to in-process at two places. He then dropped me back off at Central Processing.

I waited for a while and by that time they were somewhere in the teens, the lone person working said she was going to take an hour and a half lunch, then told everyone to come back at 1300. I headed over to the food court and had some Taco Bell, then went to the USO and hung out there using their wireless internet on my iPhone until 1300. I sat back down in the waiting area and watched as more and more people kept coming in. I knew there was no hope for them to be seen today. It really amazed me how ineffective this government office is. Time went by and I passed it by chatting with my wife and playing Words With Friends on my iPhone. The people waiting were starting to grumble and complain. The manager then came out and said that the lone worker is a contract worker, so she has to leave at 1600…no exceptions. So he said anyone over 31 should just leave and come back tomorrow.

This pissed some folks off and the ones that didn't leave right away stood in line to talk to the manager…finally they all left in defeat except for a few who just needed PIN resets. As I saw my hope diminishing as 1600 drew near, my number was called with 10 minutes to spare. I headed in and after checking my ID card, she found there was a certificate that was invalid…so I had to get a new one issued. I'm kind of glad because my last one was from basic and I was in the PT uniform…I also smiled on this one.

Finally done with this in-processing, I met up with the sergeant from my office and we headed back to the company to join the end of the day formation. I was introduced to everyone and had to stand up front. We then took off and I was brought back home.

Yesterday my wife and I ran across a website that showed all the fitness rooms at all the posts in Heidelberg. For PHV they showed "The Strong Hold" and said it was in the Village Pavilion. I had my wife make it her mission to search out this place, because the little gym I spoke about earlier that our sponsor showed us was not at the Village Pavilion. My wife did find it and we both headed there after I got off work to get a workout finally. It's no wonder we never saw this place before. It's actually underneath the Village Pavilion and is not very easy to find. It's not too big and not crowded (probably because it's hard to find). It has cardio and nautilus equipment. I wish we would have known about this place earlier as I would have tried to start getting back into shape a lot sooner. At least now we know there is a place to work out now on PHV!

I spent the rest of the night studying for the drivers test I have to take tomorrow and also slipped in a couple Sons of Anarchy as well.